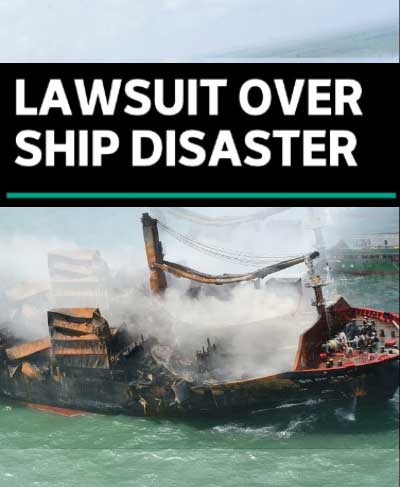 An Interview with Dr. Kokila Konasinghe by the ABC (Australian National Television) TV

Following the devastating environmental catastrophe caused by the fire which erupted onboard the MV X-Press Pearl, ABC (Australian Broadcasting Corporation) TV interviewed Dr. Kokila Konasinghe, Director of the Centre for Environmental Law and Policy (CELP) of the University of Colombo, regarding the potential legal repercussions of this incident. In her interview, Dr. Konasinghe informed the Australian News Network regarding the fundamental rights petition filed by the Centre for Environmental Justice (CEJ) before the Supreme Court of Sri Lanka. She explained that the petition alleges severe pollution of the marine environment including destruction of fauna and flora as well as the adverse impact on the livelihood of fishing communities and the recreational use of beaches in the affected areas.  Dr. Konasinghe further suggested that the Marine Environment Protection Authority can file an action alleging civil liability and claiming damages for the harm caused while also compelling the owner/operator of the vessel to assist in preventing, mitigating, and eliminating any pollution caused. When questioned regarding other legal action which may arise, Dr. Konasinghe speculated that if the ship’s crew was indeed aware of the acid leak and yet negligent in preventing further harm, there is a possibility to file for action under international maritime laws for the harm caused to the territorial sea of Sri Lanka. She went on to state that the environmental damage caused by the incident extends beyond the territorial waters of Sri Lanka and is thus a transboundary environmental issue. Dr. Konasinghe pointed out the sad irony of having to discuss this environmental catastrophe just one day prior to ‘World Environment Day’ where this year’s theme is ‘ecosystem restoration’.

When asked about how long it would take to assess the full impact of this disaster, Dr. Konasinghe emphasised that this was one of the most devastating environmental disasters Sri Lanka has faced in the recent past and that the full extent of the pollution is highly unpredictable at the moment although several interest groups are attempting to evaluate the impact over the next few weeks. Concluding the interview, Dr. Konasinghe highlighted how this disaster was not merely an environmental issue because it also has far-reaching social and economic repercussions. She drew attention to how the coastal areas affected by the disaster are mainly inhabited by fishing communities and that these people are at a risk of losing their livelihood. Moreover, she predicted that this pollution will keep Sri Lanka’s world-famous beaches out of commission for months, if not years, until the natural ecosystem is restored and that this would be a major blow to the Sri Lankan economy which depends heavily on tourism. According to Dr. Konasinghe, the adverse environmental impact of this disaster is not only transboundary in nature but also intergenerational since the long-term effects will be detrimental to future generations as well.