Student of the Year of the General Convocation 2021 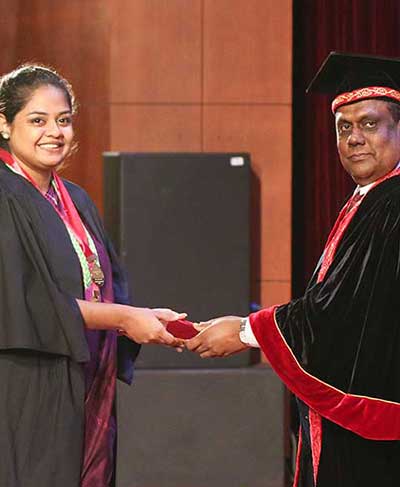 Student of the Year of the General Convocation 2021

University of Colombo congratulates Ms AAM Fonseka (2017/MS/7570), Faculty of Management & Finance and Mr AI Nilaweera (MFC/AL/2014/0509), Faculty of Medicine on receiving the Open Awards – Student of the Year at the General Convocation 2021.

Ms Andrea Fonseka completed her Bachelor of Business Administration Honours in Business Economics degree with a First Class while obtaining an overall GPA of 3.89/4.00. She was an active member of the Women’s Basketball Team of the University of Colombo from 2018 to 2021 and she captained the UOC Basketball Team in the year 2020. During her time in the Basketball team, they managed to secure the Inter University Championship in 2018 and 1st Runner position at the Sri Lanka University Games 2019. She was awarded University Colours for Basketball and Netball in 2018 and was re-awarded Colours for Basketball in 2019. She was also awarded Sri Lanka University Sports Association (SLUSA) Colours in 2018 and 2019 for her outstanding performance in Basketball. She also represented the Sri Lanka Army Basketball Women’s Team in the 52nd Senior Nationals Basketball Championship and emerged Runners Up in Level 1 during the year 2018/2019.
During her undergraduate years, she was also an active member of the Rotaract Club of the University of Colombo, Faculty of Management and Finance, serving as the Co-Director of the Community Service Avenue in 2019/2020, where she passionately served as a Chairperson, Committee member and Project Co-Ordinator in numerous projects. Furthermore, she has also actively participated and contributed as a resource person for projects organized by other clubs and societies at UOC. She is also the recipient of the Prof. JASK Jayakody Memorial Gold Medal for the Most Outstanding Student of the Faculty of Management and Finance for the year 2021.

Mr Akhila Imantha Nilaweera hailing from St. Servatius College, Matara entered the Faculty of Medicine having being placed 49th in the island at the first attempt in the advanced level examination. He graduated MBBS with Second Class upper division honours with distinctions in Biochemistry and Physiology. He also received several scholarships including the Chinese Ambassador’s Scholarship in 2021. He was ranked 39th in the final common merit list out of 1060 medical graduates in the country and is currently undergoing internship training at the National Hospital in Colombo.
Akila also engaged in research. He was the co-author of two papers in peer-reviewed index journals. He presented his undergraduate research findings at the International Olympic Committee World Conference on Sports Medicine in Monaco in 2020.
Akila excelled in track and field sports and in swimming. He is six times coloursman for these events at the University level and four times coloursman at Sri Lankan Universities (SLUSA) level. He broke, set and then bettered his own record for three consecutive years in the 110 meter hurdles event at the Sri Lanka University games. He still holds the University of Colombo record for the event. He captained the university track and field team in 2018. He represented Sri Lanka in track and field events at the World University Games in Taiwan in 2017. He was selected as the Student Ambassador for University Sports in Sri Lanka and participated in the International University Sports Federation (FISU) Volunteer Leaders Academy in Russia in 2019. Subsequently, he was recognised as one of the most active student ambassadors in the world.
Akila is a dancer and performed both locally and internationally. He is also best known for his portrayal of the character of the legendary king “Ravana” in the ballet opera “Ravana: the Legend Untold” the first ballet opera produced by a University in Sri Lanka in 2018. Mr Nilaweera is a social entrepreneur and the founding Vice President of the social enterprise “YouPAH” – Young Professionals Alliance for Health – that works towards empowering young professionals to take control over their health.