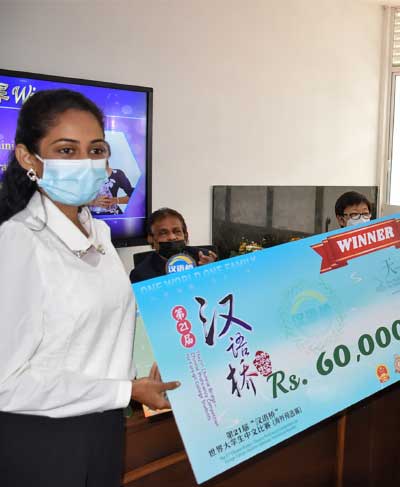 The Awards Ceremony of the 21st “Chinese Bridge” Chinese Proficiency Competition for undergraduates in Sri Lanka was successfully held on 20st of June 2022 in the boardroom, Faculty of Arts under the patronage of his excellency Mr. Qi Zhenhong-Ambassador, Chinese Embassy in Sri Lanka, Senior Professor H. D. Karunaratne, Vice Chancellor of the University of Colombo, Senior Professor Lasantha Manawadu, Dean of the Faculty of Arts, and Mr. Zhang Yingbao, Chinese Cultural Counsellor of the Chinese Embassy in Sri Lanka.
The competition was sponsored by the Centre for Language Education & Co-operation and the Chinese Embassy in Sri Lanka. It was organized by the Confucius Institute of the University of Colombo. Confucius Institute of the University of Kelaniya and the Confucius Classroom of the Sabaragamuwa University of Sri Lanka were the co-organizers. Ambassador Mr. Qi Zhenhong mentioned that the “Chinese Bridge” is a series of Chinese competitions and an important platform for young students from worldwide to learn the Chinese language and understand the mutual culture among different nations. He further stated that it has become an important brand event for international cultural exchanges recently. Also, he mentioned that the “Chinese Bridge” has been promoting China-Sri Lanka friendship and mutual understanding over the years and this year marks the 65st anniversary of the establishment of China-Sri Lanka diplomatic ties. He expressed his ideas with the strong expectation that Sri Lankan young people will grasp opportunities and boost the bilateral ties via learning Chinese.
Professor Karunaratne stated that the Confucius Institute has been providing a platform for cultural exchange and appreciated it taking steps to promote Chinese language learning by hosting the “Chinese Bridge” competition and other activities. Professor Manawadu, the Dean of the Faculty of Arts, applauded both the directors and the CIUC team for their hard work. He further stated that the Confucius Institute is a very small unit in the Faculty of Arts but it is conducting very big tasks and therefore an invitation is there for such events every week and hence there is news to be published frequently.
On behalf of the Confucius Institute at the University of Colombo, Professor Wimal Hewamanage welcomed the participants and he mentioned that CIUC offered a new bachelors program this year for undergraduates to grasp opportunities to learn Chinese, and highlighted the same of being the most contemporary achievement of CIUC. Sri Lankan Undergraduates from six universities participated in the contest via zoom due to the COVID-19 pandemic situation and the theme of this event was “One World One Family” and it consisted of three parts; the keynote speech, the knowledge quiz, and the talent show.
Ms. Hashini Chalandi from the University of Kelaniya won the first place in the competition and was awarded a prize of Rs.60,000, the champion award, a certificate, in addition to which she won a full scholarship to China offered by the Chinese Language Education Centre. The winner will eventually participate in the final round in China in the near future as the representative in Sri Lanka. 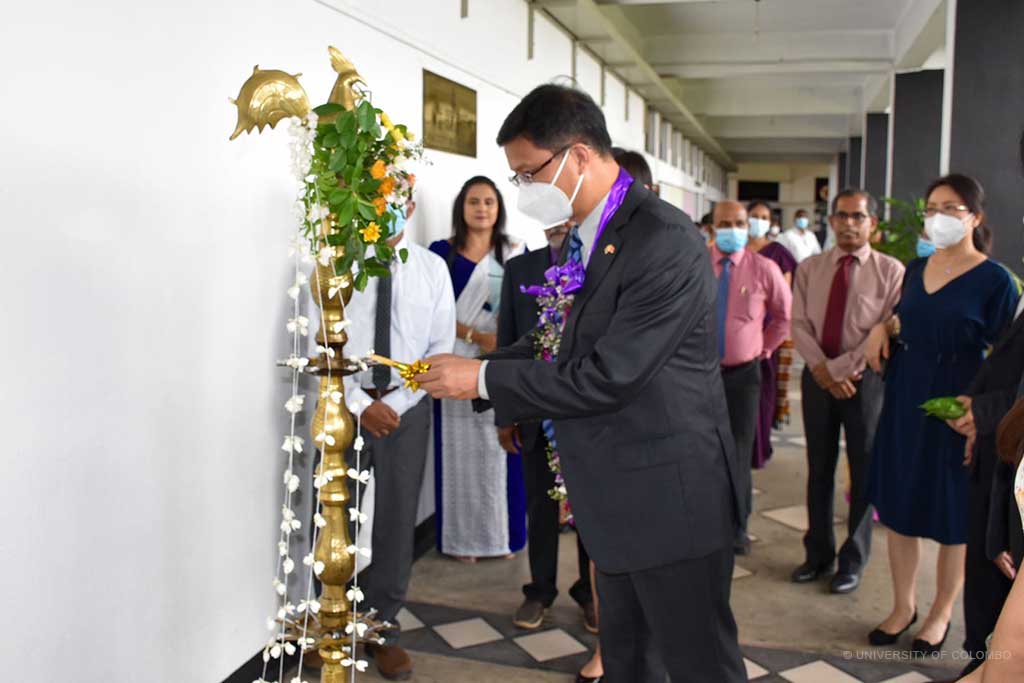 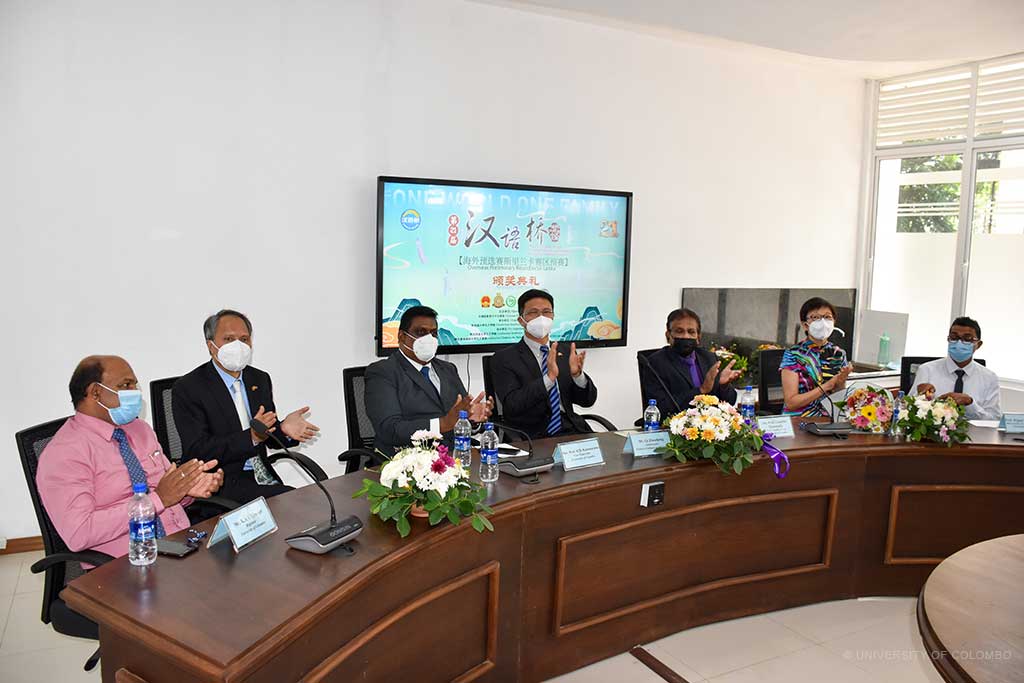 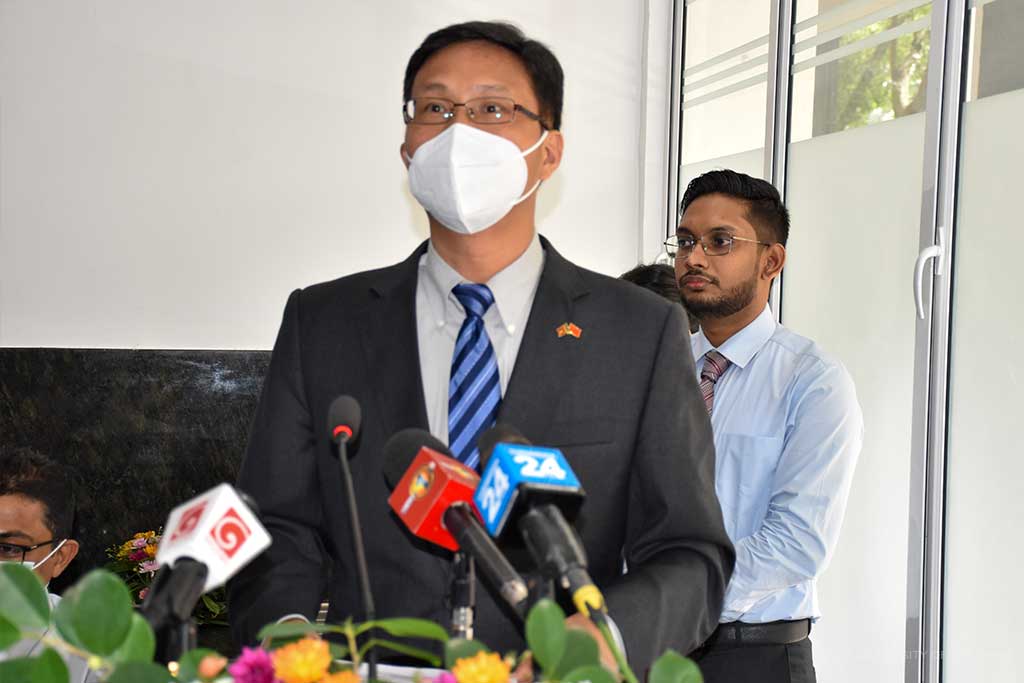 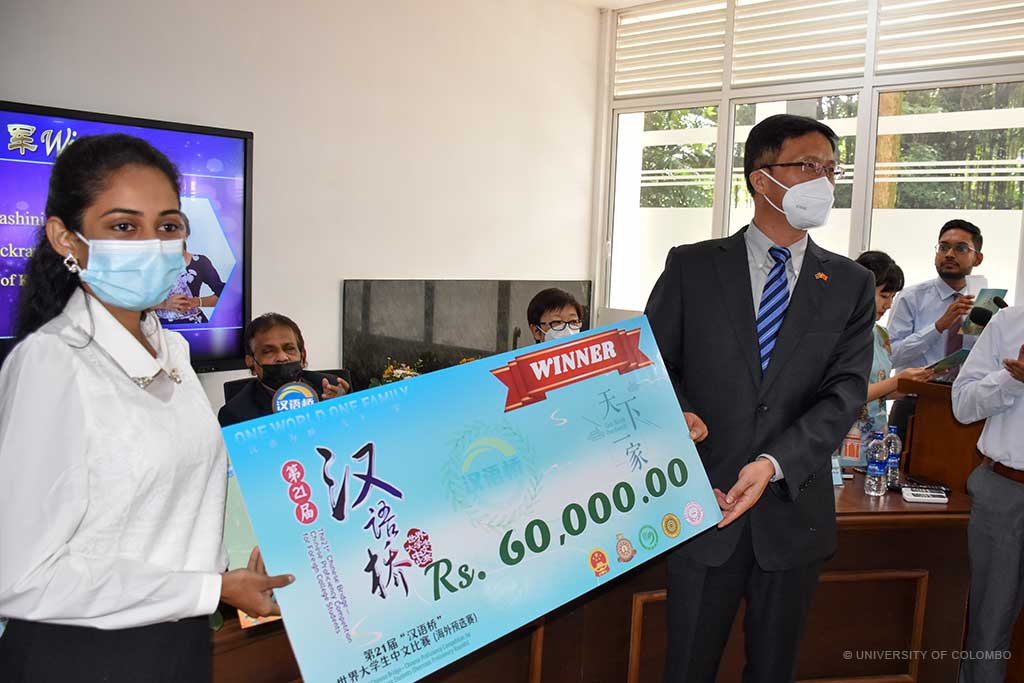 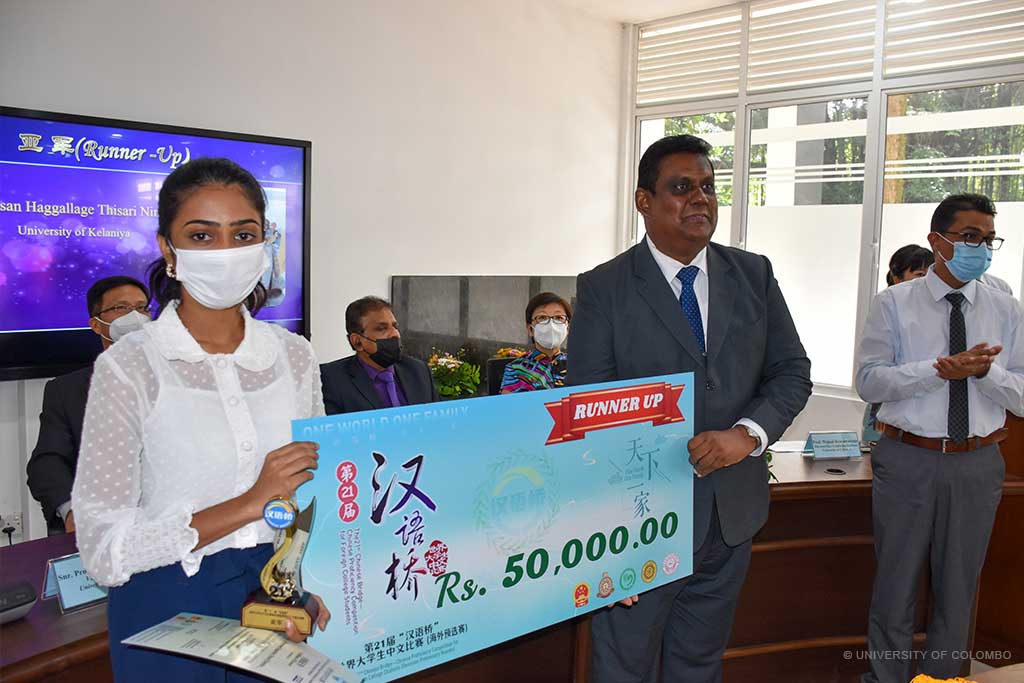 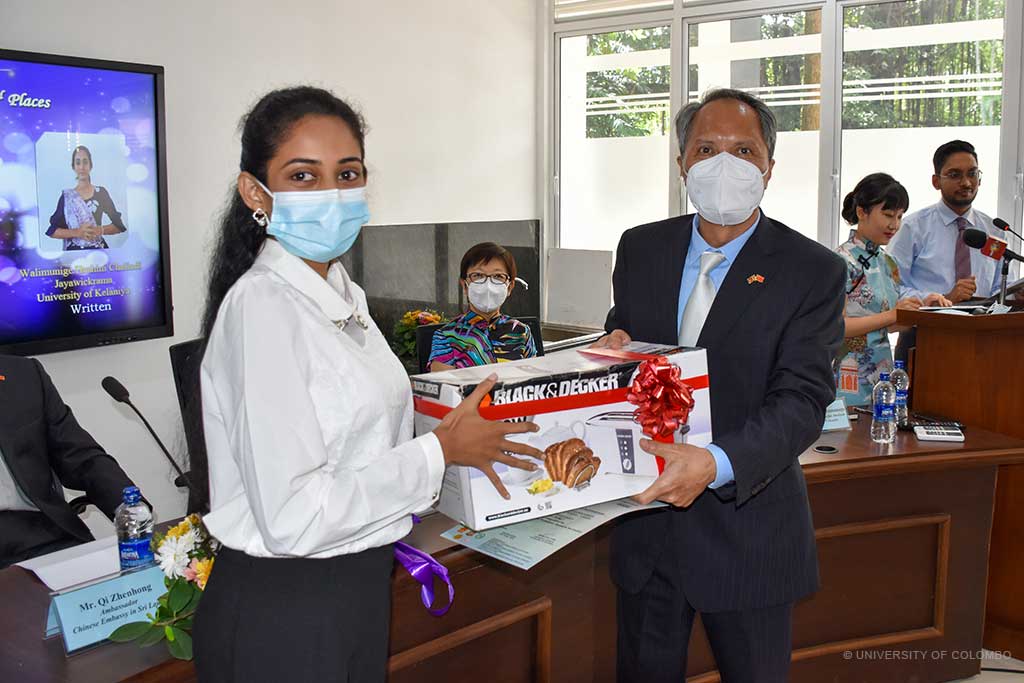 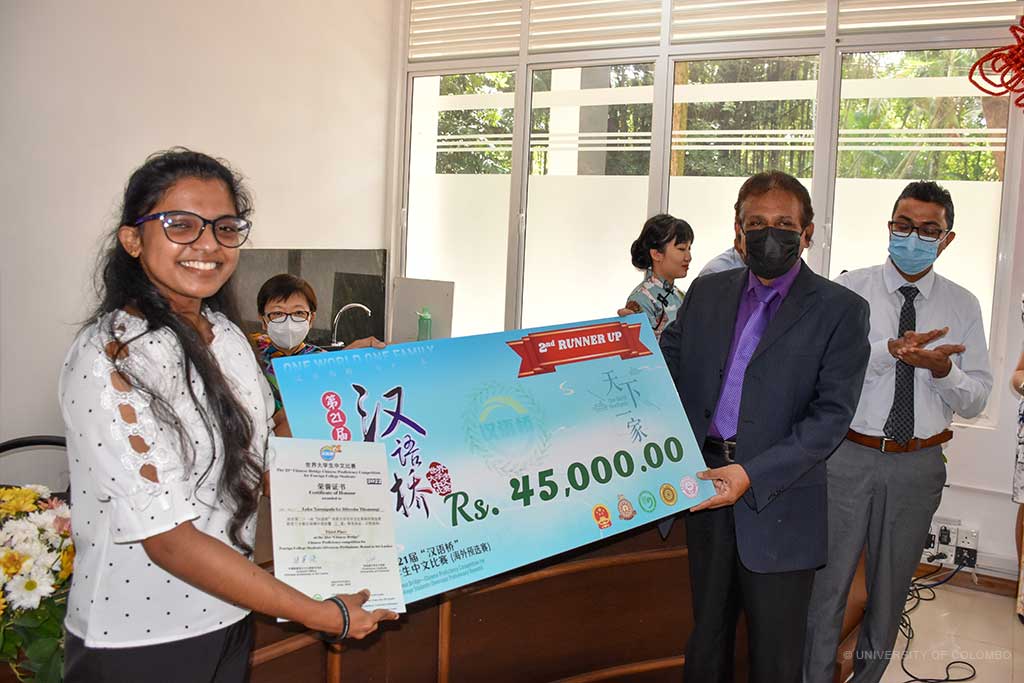 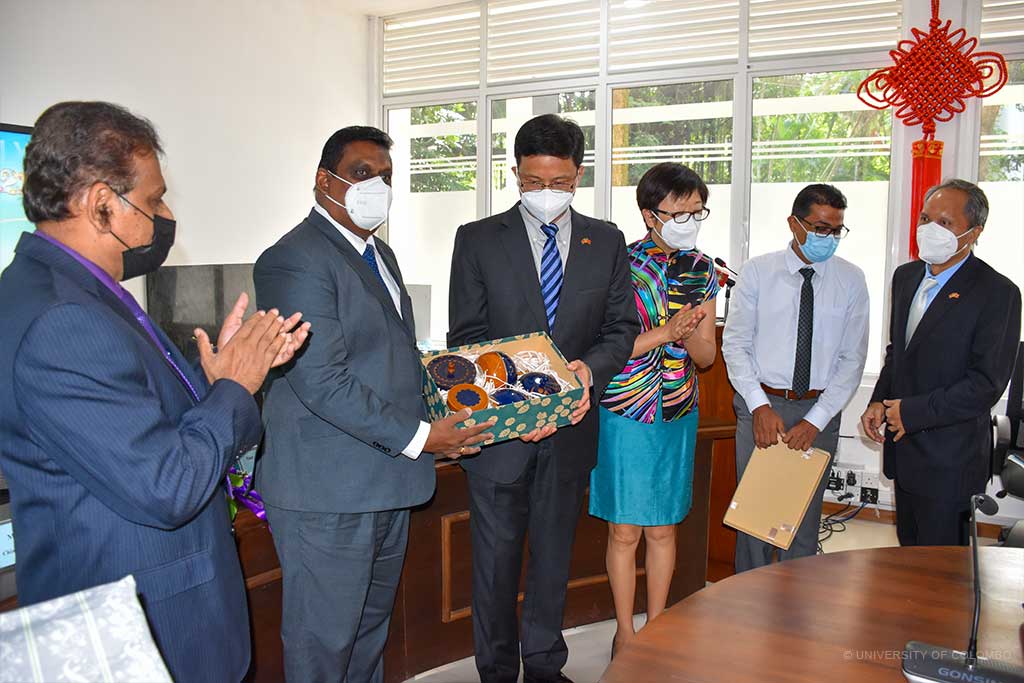