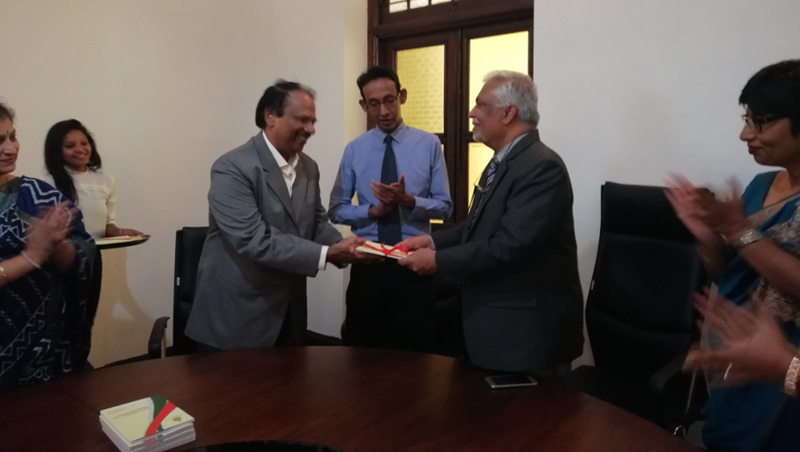 Presenting, his monograph titled ‘Prospects of Cooperation in Higher Education and Capacity Building: A Case Study of India and Sri Lanka’, to the Vice Chancellor of the Colombo University, Prof. Lakshman Dissanayake at College House, he said it was an attempt to use Sri Lanka’s Vision for 2030; of becoming an IT and Education Hub, to facilitate closer ties between India and Sri Lanka.

His research thus saw how a feasibility study could be conducted on how higher education can be improved between India and Sri Lanka, said Prof. Gulrez.

According to the Professor, India which had a foreign student population of 50,000, only had 1,200 Sri Lanka students studying there. However, given that out of the 220,000 students passing their A/Ls, only 23,000 qualify for state Universities, Prof. Gulrez noted that there was immense potential for those left behind to study in India. Prof. Dissanayake, meanwhile, said he was interested in internationalizing the Colombo University further. “We can no longer work in isolation in a globalized world,” he said.

The Vice Chancellor spoke of the need to improve on two areas of the university; its research profile, and patenting and licensing of research.

He said he planned to appoint a Technology Transfer Officer at the University to help improve the patenting and licensing of products.

In this endeavour, Prof. Dissanayake also touched on the possibilities of further enhancing the exchange of knowledge and staff between Indian universities and the University of Colombo.