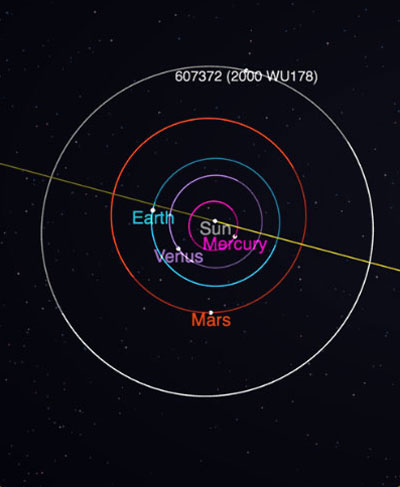 On March 21, 2022 the International Astronomical Union (IAU) officially named an asteroid to honour the University of Colombo. The University of Colombo alumnus, Dr Nalin Samarasinha, and fellow astronomer, Dr Tod Lauer, discovered this asteroid in 2000 from the Kitt Peak National Observatory in Arizona, USA. Recently, after its orbit was well established, the asteroid was assigned the number 607372 and the discoverers were granted the official discovery credit.
The discoverers of a numbered asteroid can name it following a strict set of guidelines. The IAU named the asteroid following these guidelines as “Colombounilanka”. This is the first time that a scientist of Sri Lankan-origin has received the discovery credit to name an asteroid. Only a few universities globally have asteroids named after them and now the University of Colombo joins that exclusive league.
Colombounilanka is a 1-2 km size asteroid in the mid region of the asteroid belt in our Solar System. As such, it is not in a collision course with Earth and always more than 1.4 astronomical units (i.e. more than 210 million km) away from Earth. Colombounilanka takes 4.2 years to make a full journey around the sun in a slightly elliptical orbit. This asteroid can only be seen with a powerful telescope.

Dr. Samarasinha said he decided to name the asteroid after the University of Colombo, which recently celebrated the centennial of its founding, in recognition of the University’s contributions to higher education, as a tribute to his teachers at the university as well as an inspiration to the next generation of students throughout Sri Lanka.