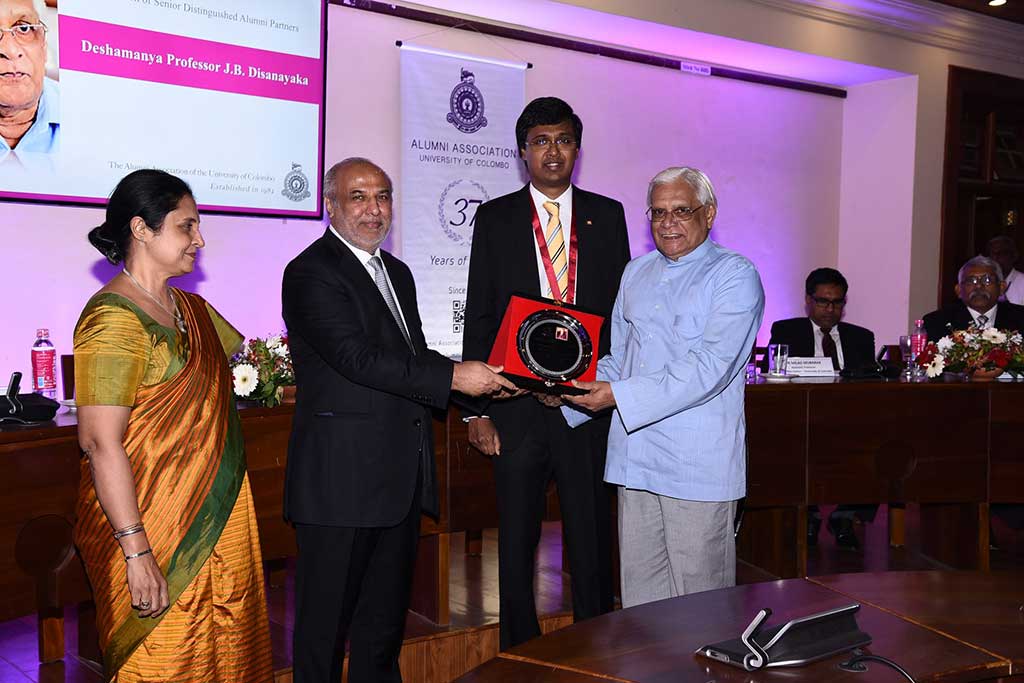 The 37th Annual General Meeting of the Alumni Association of the University of Colombo was concluded recently at the Senate Hall, College House, University of Colombo. Alumni President Rajeev Amarasuriya and the Office-bearers were elected for a further term of office. The Chief Guest at the AGM was Hon. Rauff Hakeem, MP, Minister for City Planning, Water Supply and Higher Education, and the meeting was attended by the Vice Chancellor Senior Professor Chandrika N Wijeyaratne, Past Presidents of the Association, Academics and Members. Hon. Rauff Hakeem, in his Keynote Address congratulated the Alumni Association and the University of Colombo for the efforts made towards the development of the undergraduates and the University. Whilst the University should be proud of all the past accomplishments, he said that the Sri Lankan Higher education system should strive to improve on international rankings and recognition as well.

Reflecting on the recent events, he said that it was time that we addressed issues of religiosity and our connection to existential values concerning co-existence. The Minister citing many statistics stated “We have comparatively a very low annual population growth rate of 0.92%, a low birth rate of 1.6%, well below the lower middle-income countries. We are closer to countries like Brazil and Turkey.  Our structure of the economy is moving away from the traditional agriculture based and towards manufacture and services. Right now, the services sector accounts for 6% of the GDP and the industrial sector accounts for 31% of the GDP. What is more encouraging is our high status in the Human Development Index. Our Primary education completion rate is 95%, secondary education completion rate is 86%, the literacy rate is at 95 % and the life expectancy for females 75 years and males 72 years, so we are virtually on par with upper middle-income countries and we have progressed well”, he added.

He further stated that during the last four years alone, almost 80 hostels have been built for Universities which can house 400 students each. He further stated that there has been an increase in the intake for universities from 24 000 to almost 33000 including an increase in almost 100 seats in the Ruhuna University for Medicine. He further stated that two new medical faculties were opened in Sabaragamuwa and in Wayamba. The Minister further stated that with the introduction of a new piece of legislation to set up a separate Quality Assurance and Accreditation Commission, he wishes to regularize the Higher Education system and further improve its quality to a level that would attract international students as well. Mr. Rajeev Amarasuriya President of the Alumni Association in his address highlighted the key activities that were carried out by the Association in the past three years, with focus on the last year. The Association undertook several student welfare Projects including the launch of an internship programme and the Leadership programme instituted with the help of the Bridge Partnership and NTB. He greatly appreciated the contributions made by the Alumni Partners by way of monetary and other contributions.

Mr. Amarasuriya briefed the Association of the largest project in the history of the institution, which is to build a professional swimming pool and said that he is thankful to the Hon Minister Rauff Hakeem for extending his fullest support towards the construction of the Swimming Pool and that he hopes to work with him closely to see this project becoming a reality in the near future. He also stated that Next year is a very important year for the University of Colombo, as it would be celebrating, 150 years since the formation of the Ceylon Medical College, which also marks the beginnings of the University of Colombo. He went on to state that there will be a lot of activities that the Alumni will necessarily be involved with, and together with the University, some events dedicated for Alumni would also be held. Reporting to the membership that the Association in the last three years had achieved substantial progress as an Alumni body, it was now time to look at the next phase of development of this Association, which would focus on expanding the Alumni base to have a larger number of Alumni engaged with the University, he added.

The Secretary’s Report was presented by Ms. Ruwandhi Thanthrige who provided a detailed report of the activities of the Association. Speaking at the AGM, the Vice-Chancellor Senior Professor Chandrika Wijeyaratne said that the University of Colombo had consistently strived to provide the best education and best learning facilities for students. She stated that with the collective effort of the administration, the Alumni Association and the students, it is possible to achieve high levels of success. Commenting on the activities of the Alumni Association, the Vice Chancellor remarked that she was very pleased to see the Association engaging in many activities aimed at enhancing the quality of the undergraduate experience. She was particularly happy to note that the Association had come forward and provided leadership for the swimming pool project. As the only state University in Colombo, it is important for the University to have its own pool, in order to hone the skills of its swimmers, many of whom are extremely talented.

A special item on the agenda was the felicitation of five very Senior Distinguished Alumni for their contributions in their respective fields and their overall contribution to the country at large. This felicitation of Senior Distinguished Alumni was the third such felicitation, with the first held at the AGM in 2016 and thereafter at the AGM in 2018. Kalakeerthi Dr. Edwin Ariyadasa, Deshamanaya Vidyajyothi Professor Colvin Gunaratna,  Vidyajyothi Professor Lalitha Mendis,  Deshamanya Professor J.B. Disanayaka and Deshabandu Dr. C.G. Uragoda were felicitated for their respective contributions to the nation. Furthermore, the Alumni Partners of the Alumni Association; LOLC Group, Nations Trust Bank PLC, Deutsche Bank PLC, 3CS and Akbar Brothers were recognized for the financial and non-financial support given to the association to achieve its student development and welfare goals and Mrs. Keshini Jayawardena – Lead Consultant of the Bridge Partnership in Sri Lanka was felicitated for conducting on an honourary basis an ongoing series of high-level Leadership Prorgammes followed by Mentoring for undergraduates in collaboration with Nations Trust Bank. 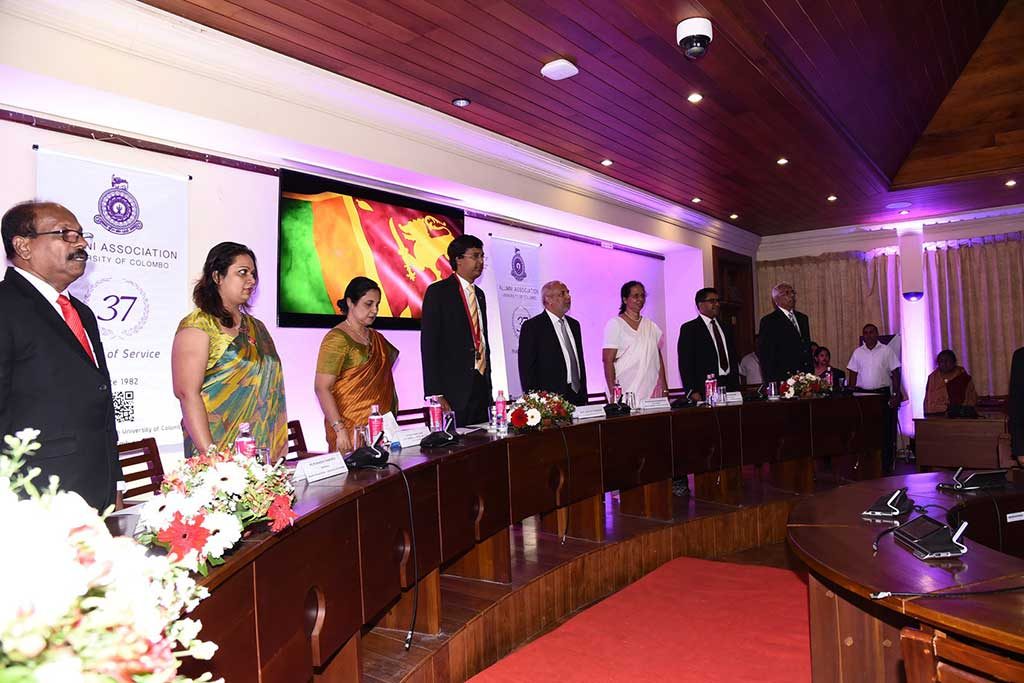 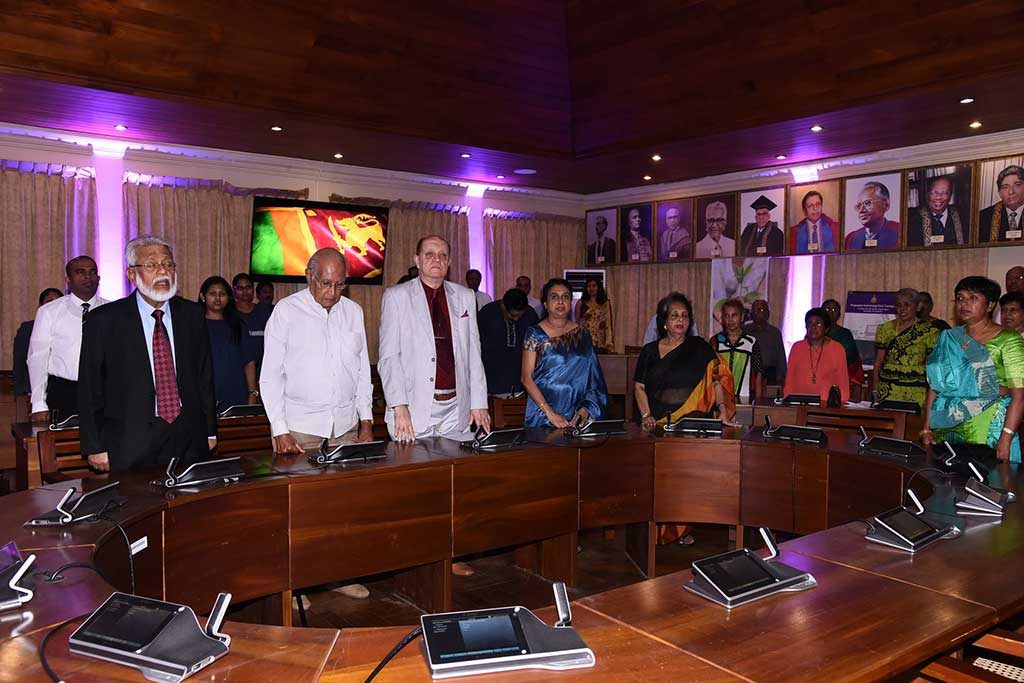 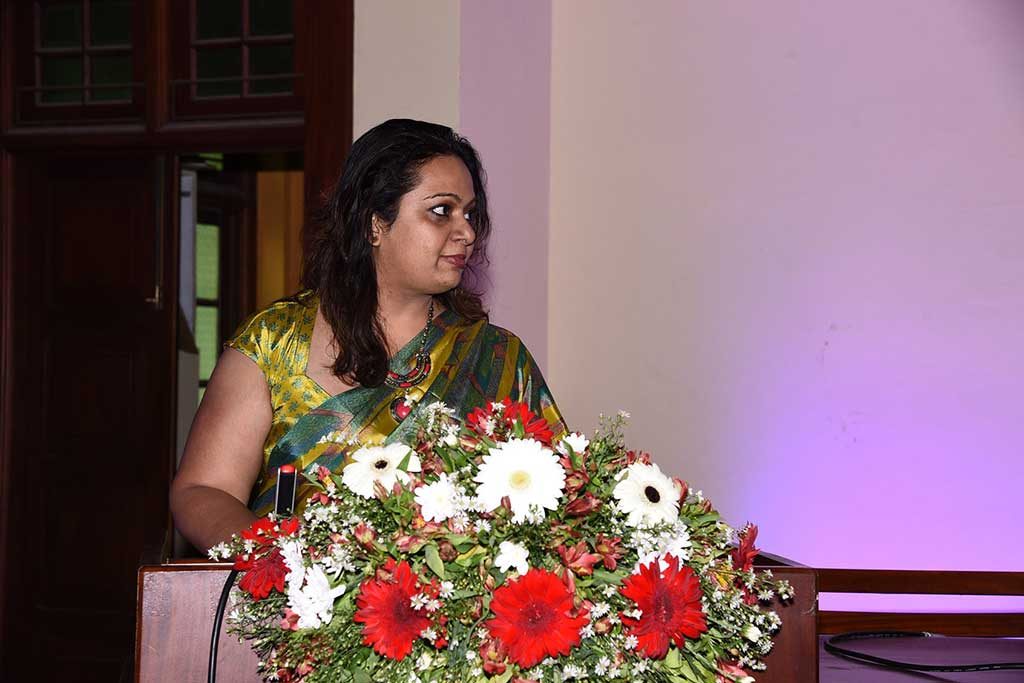 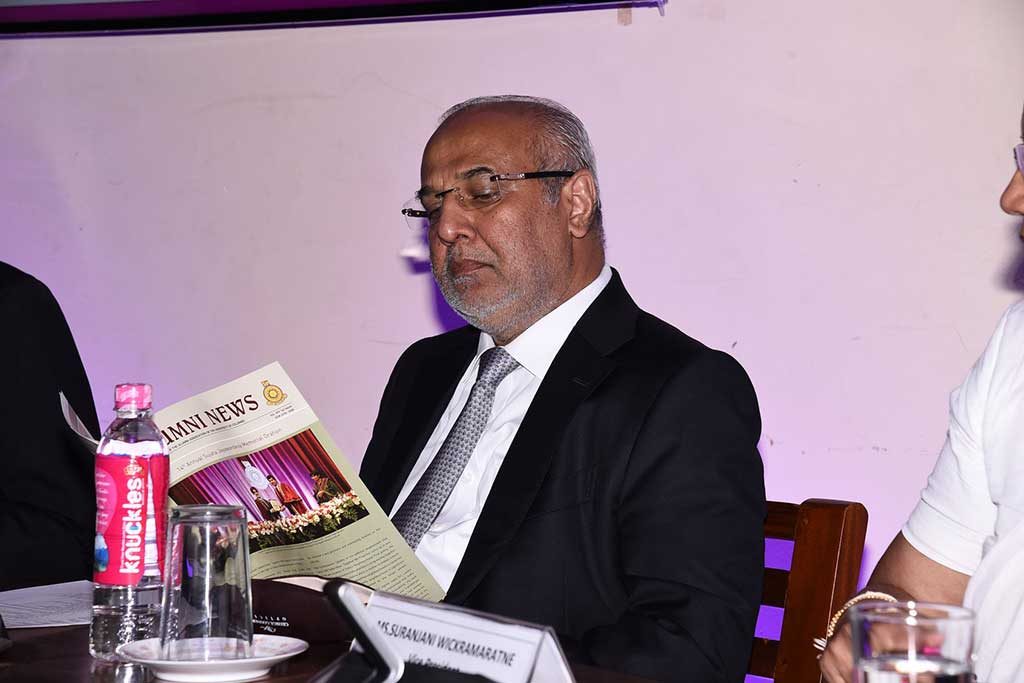 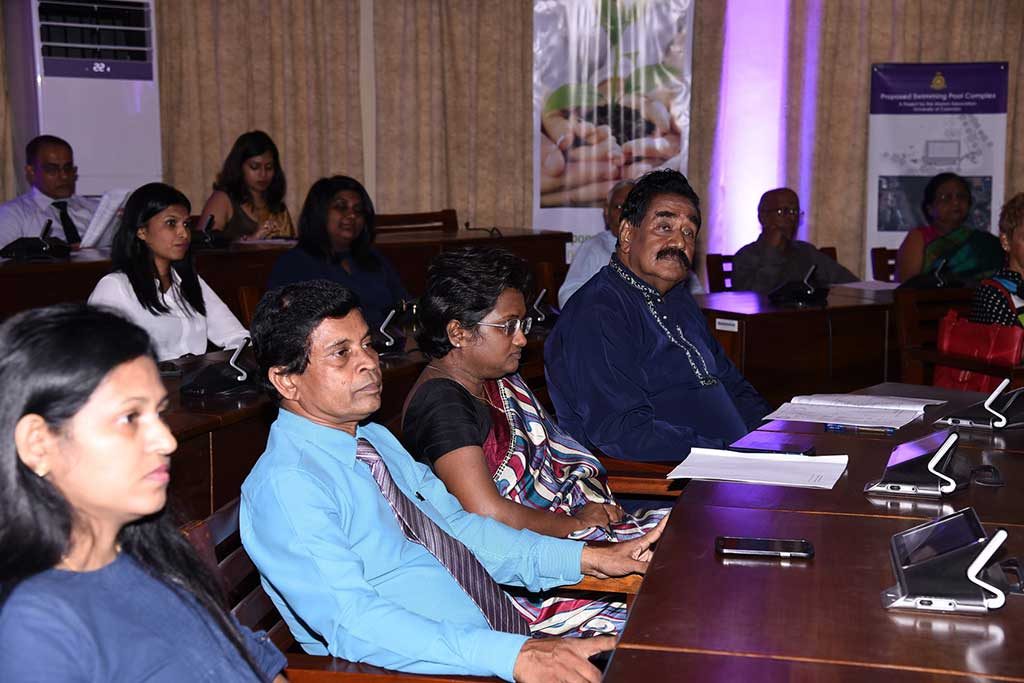 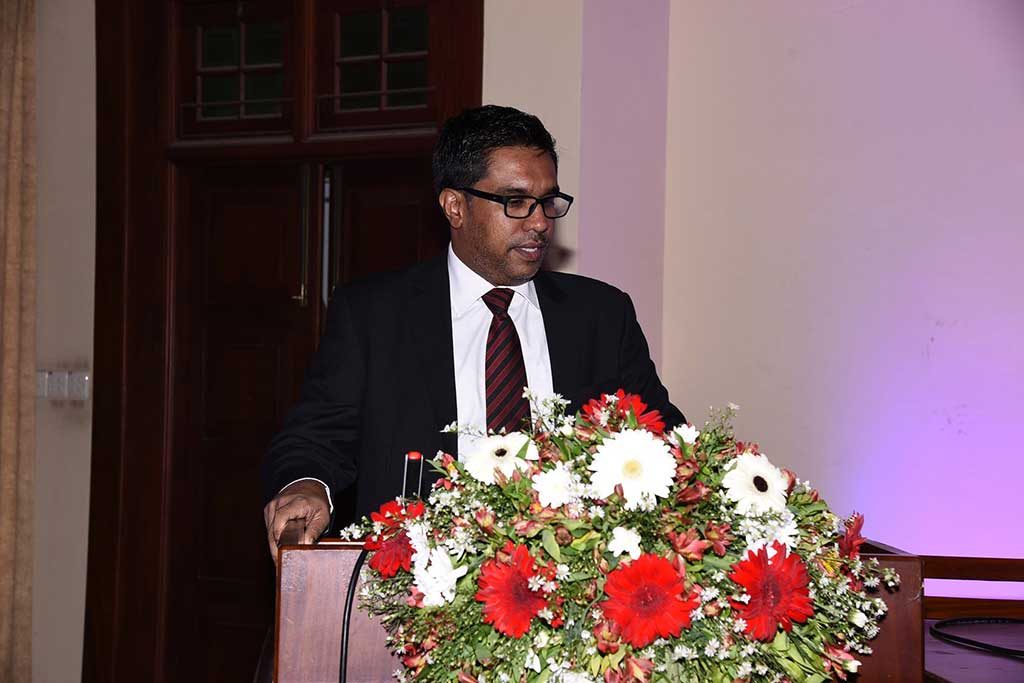 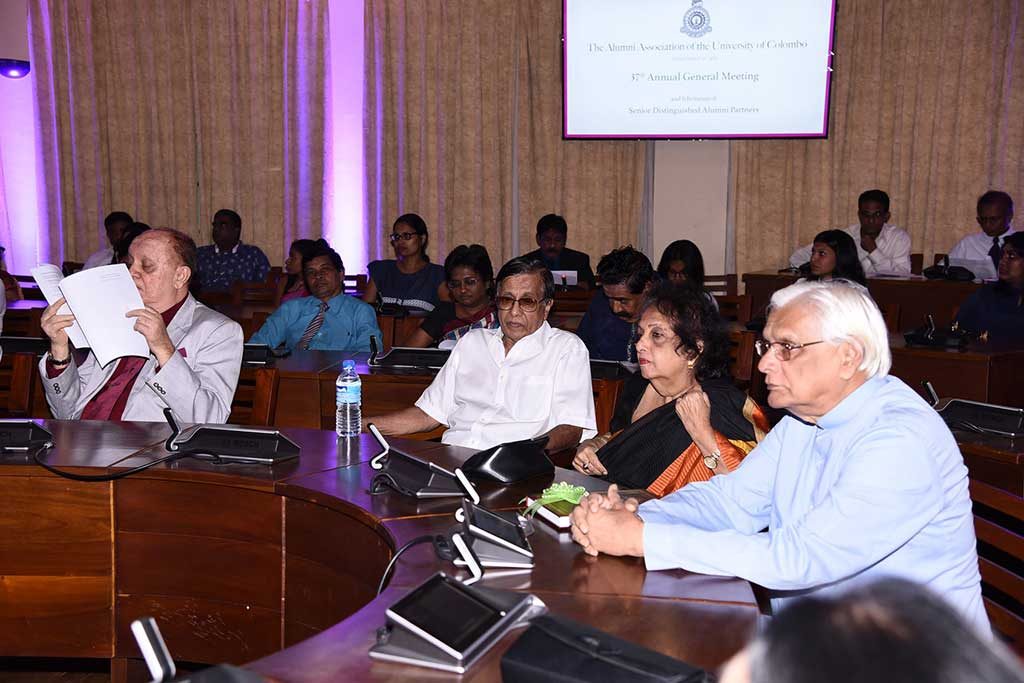 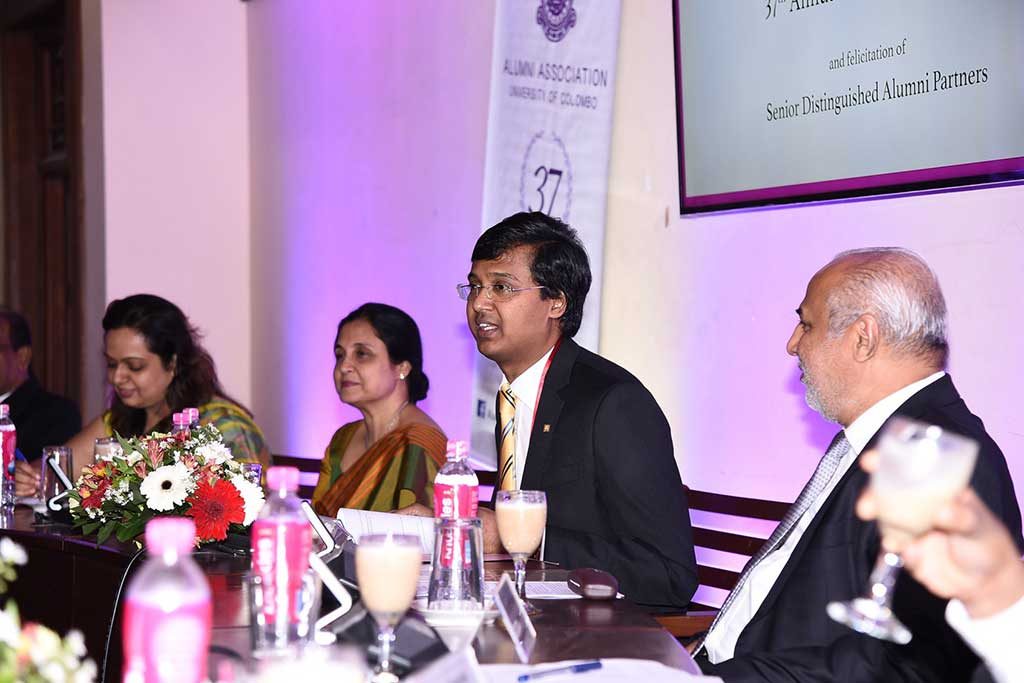 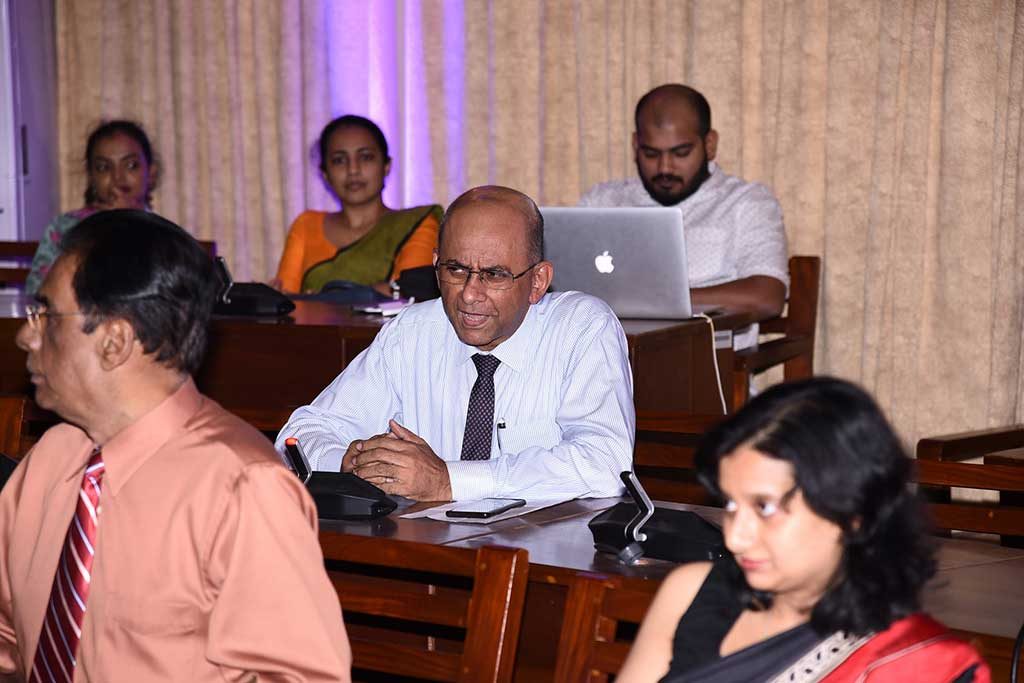 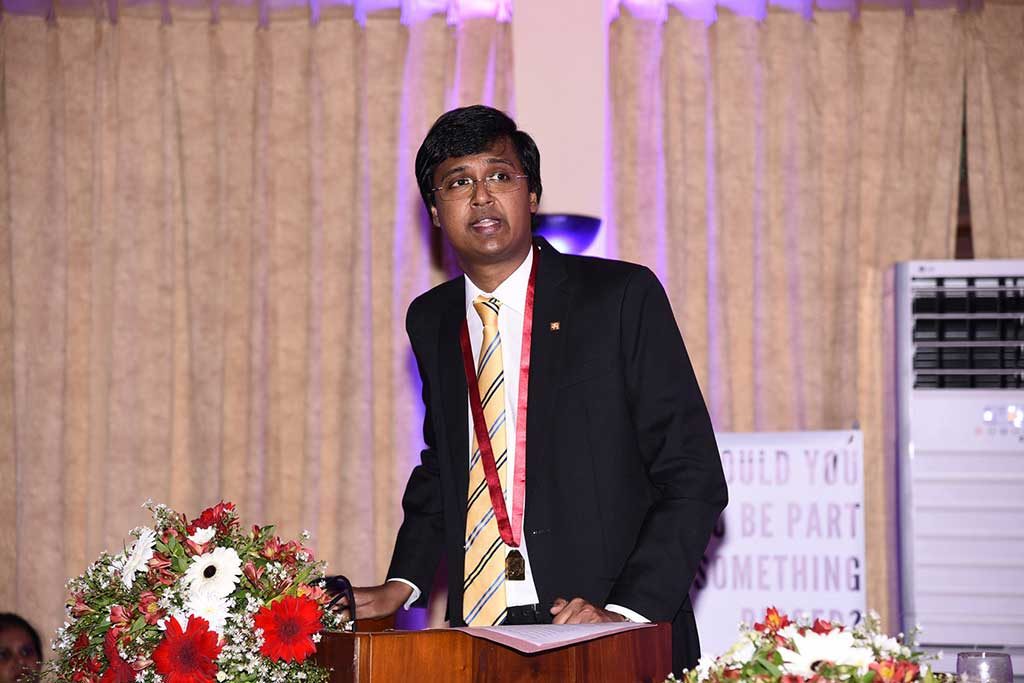 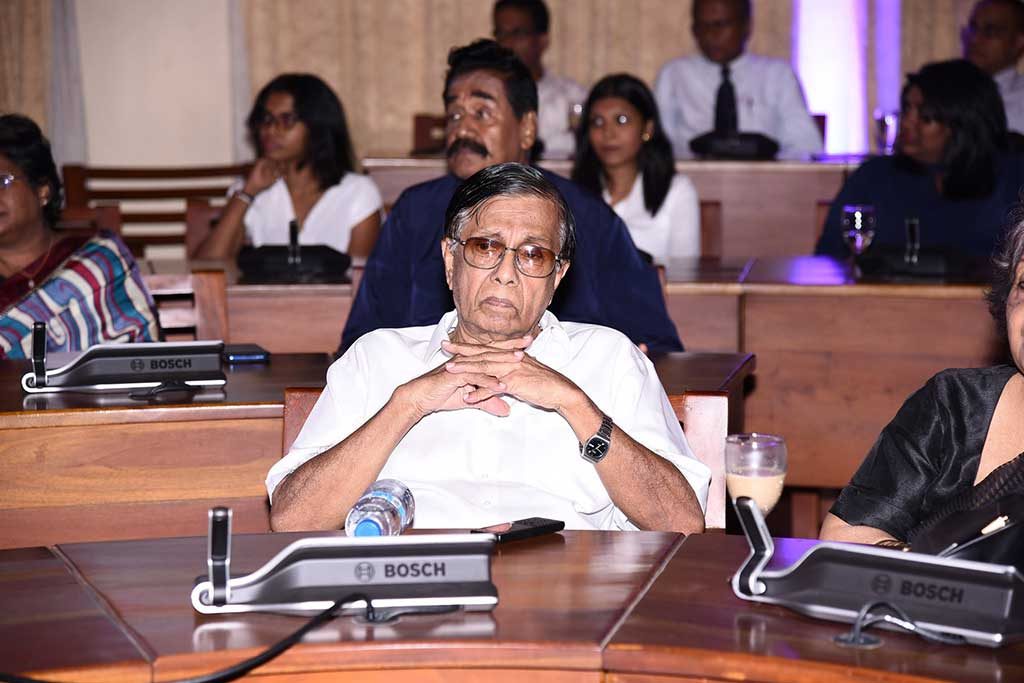 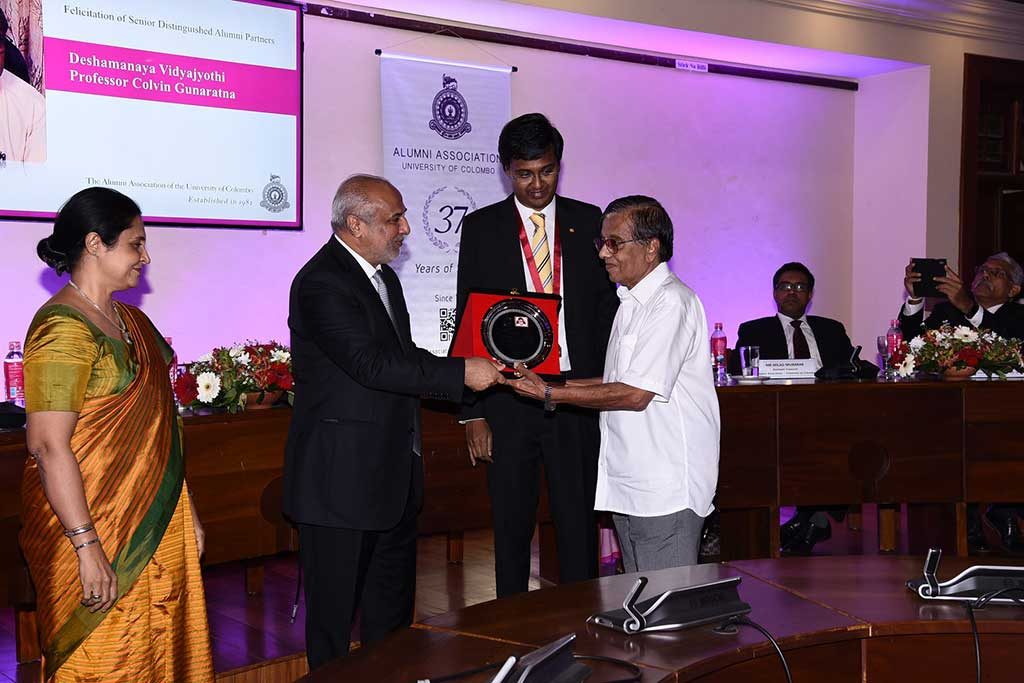 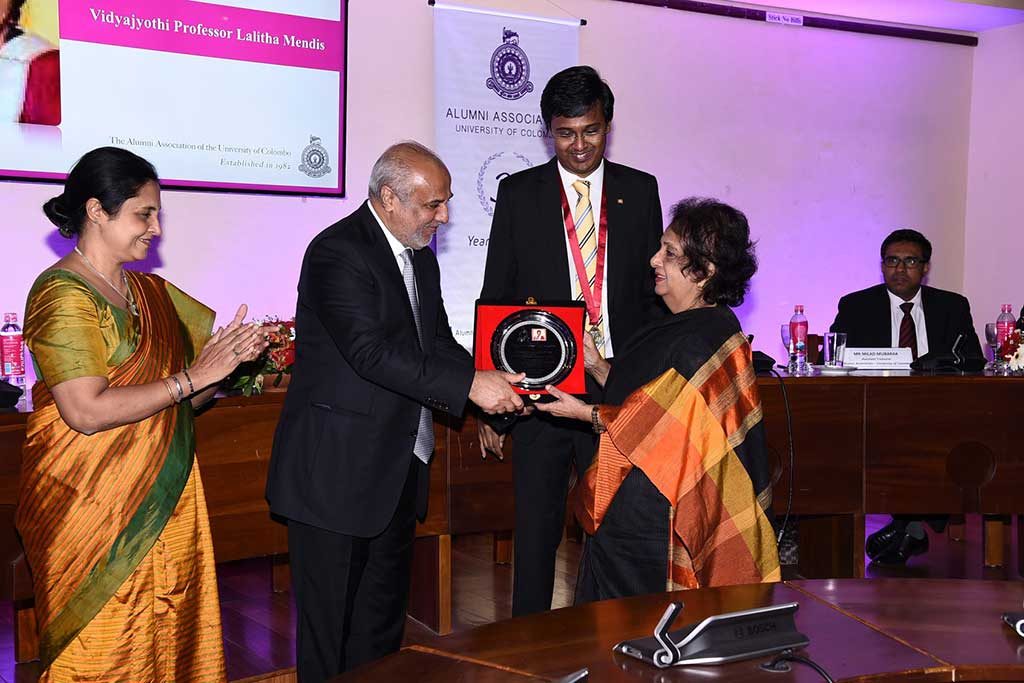 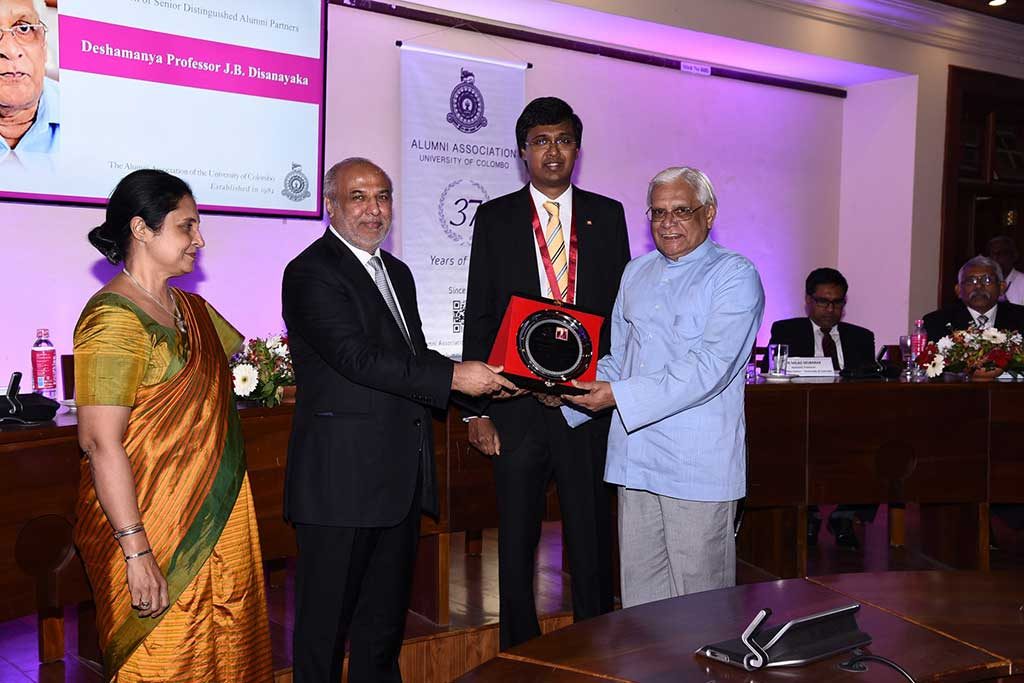 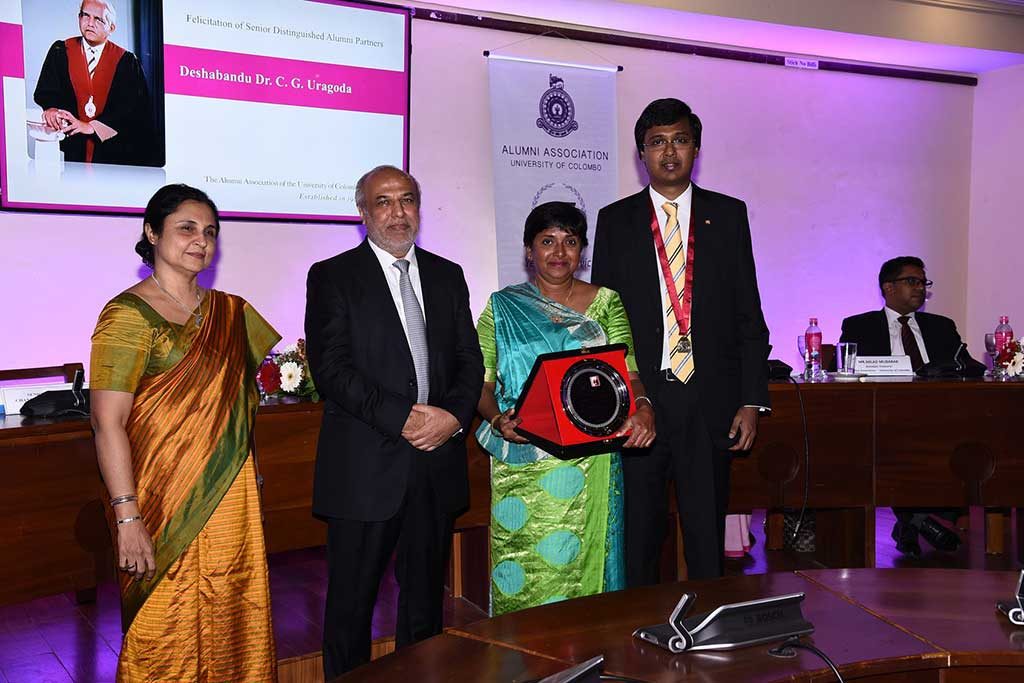 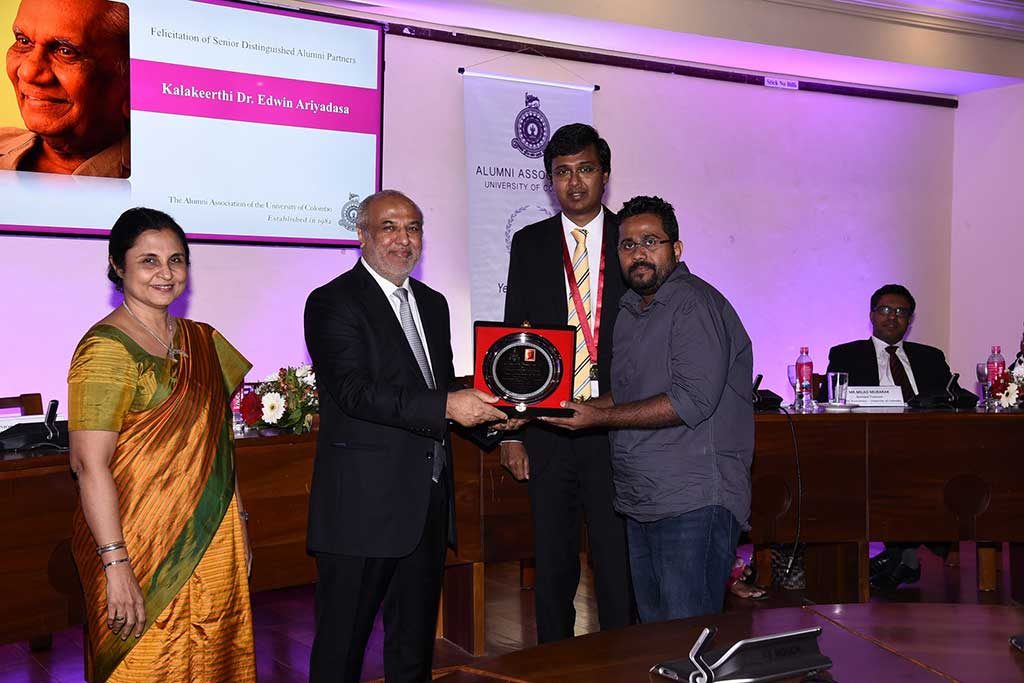 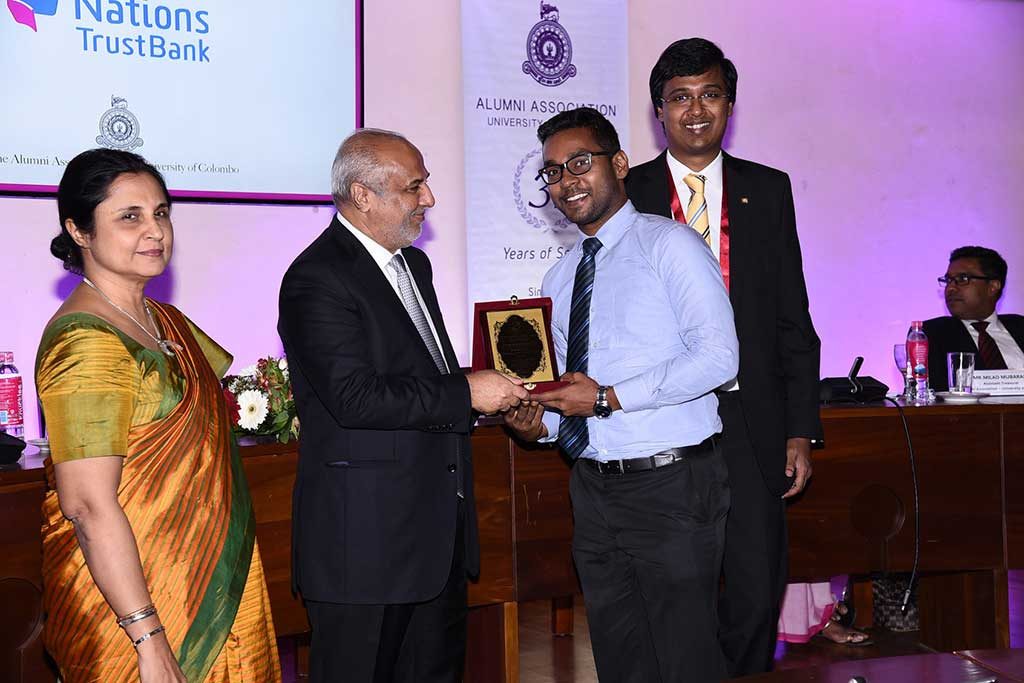 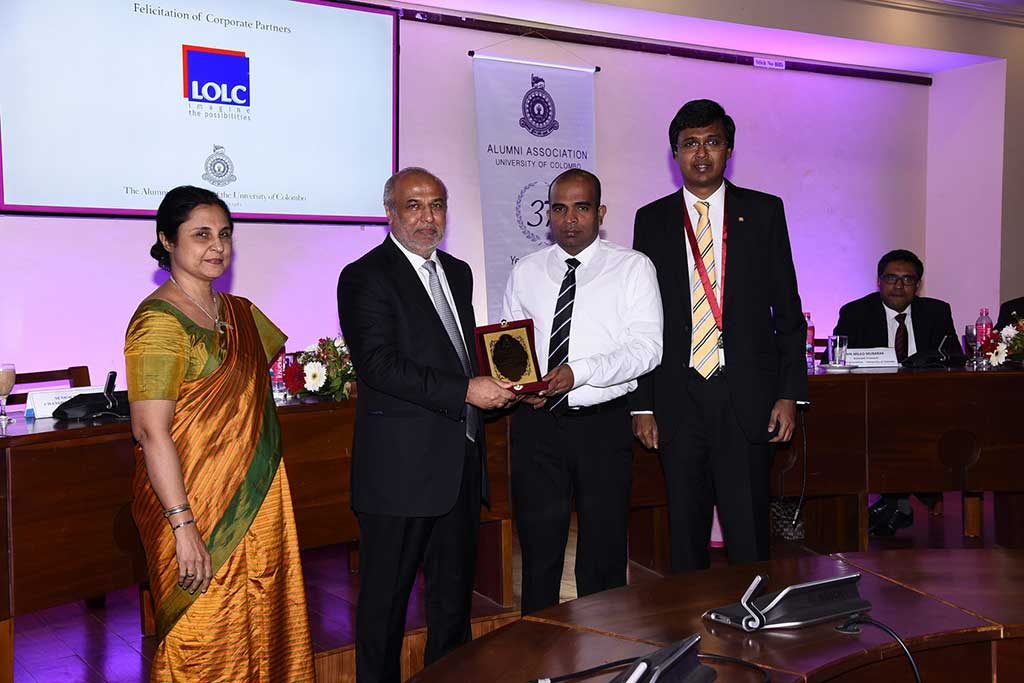 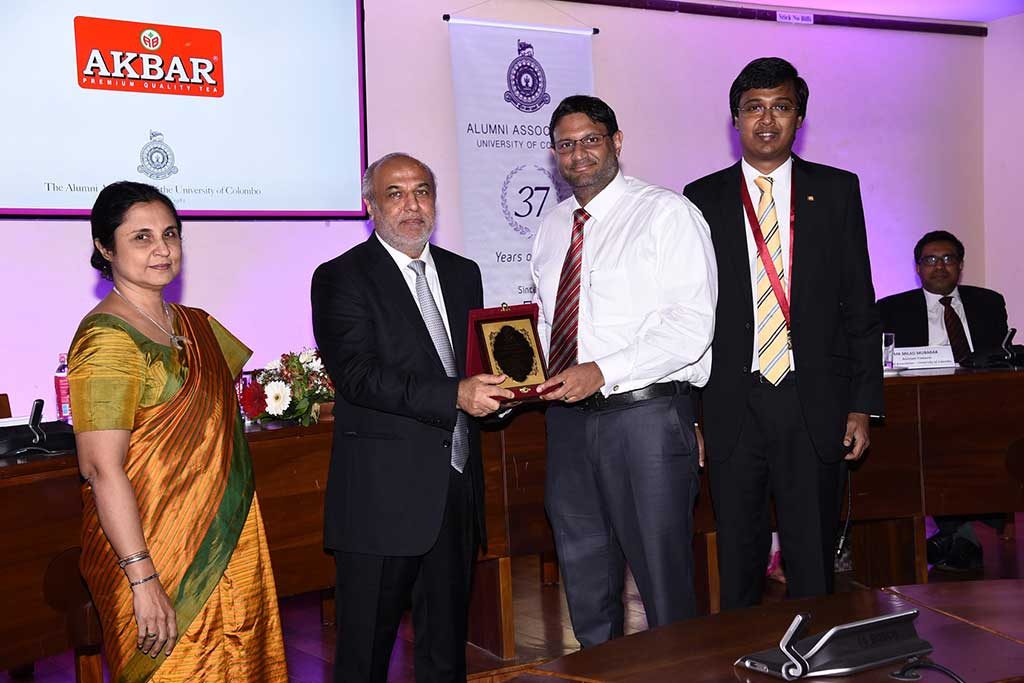 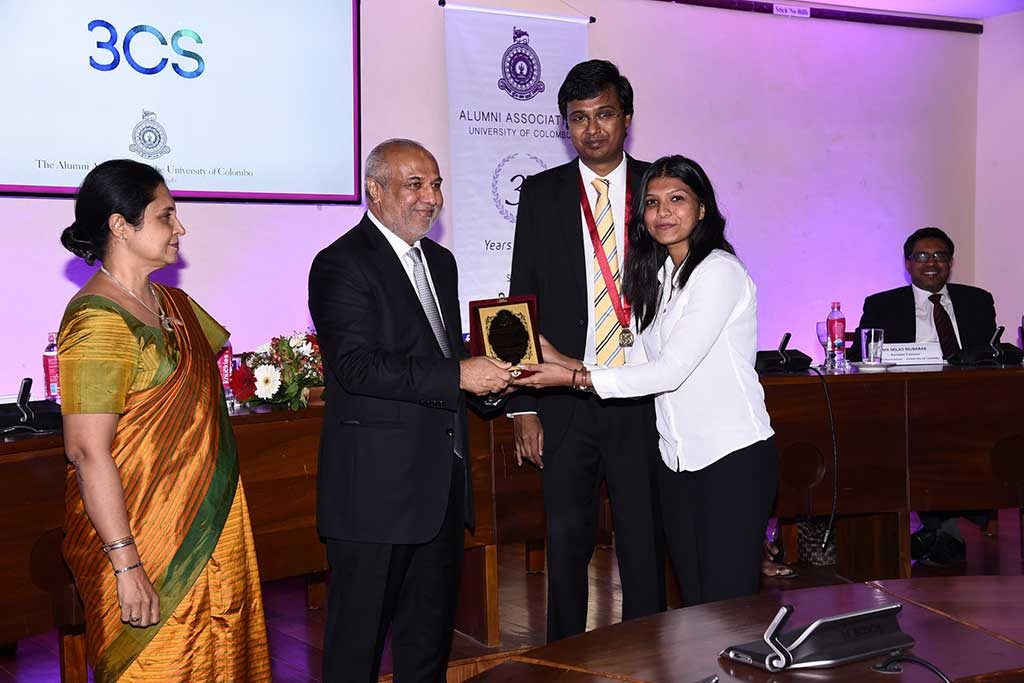 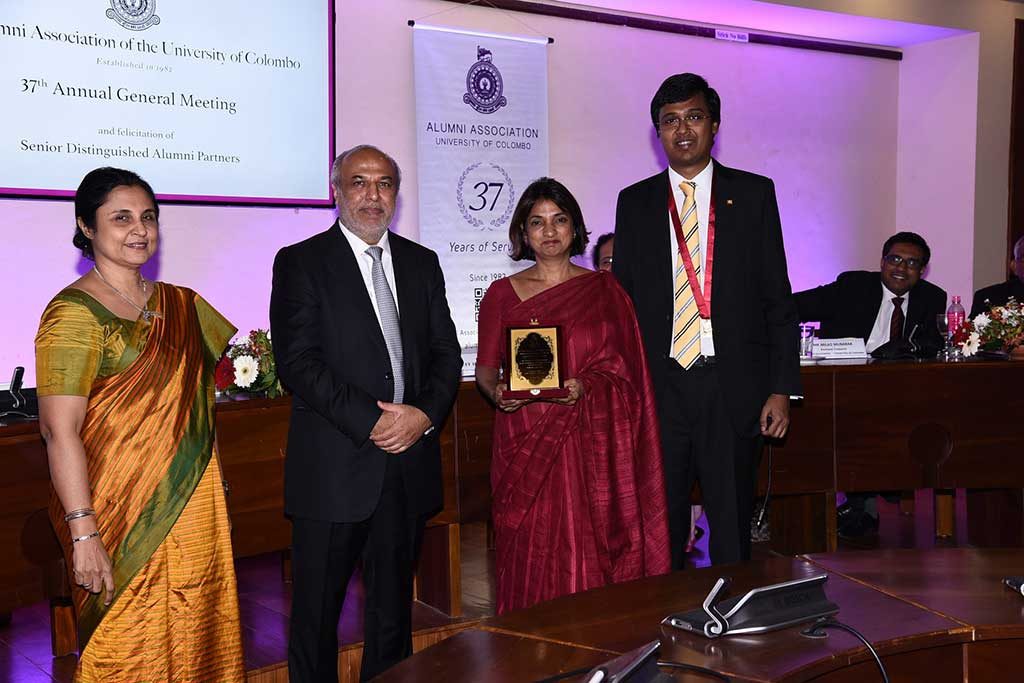 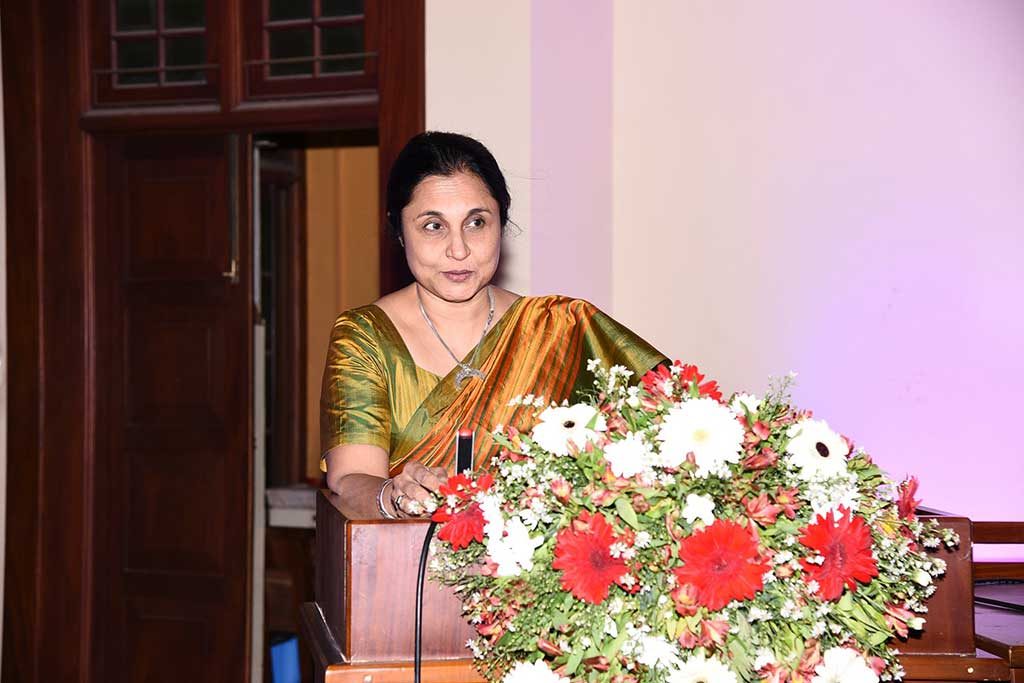 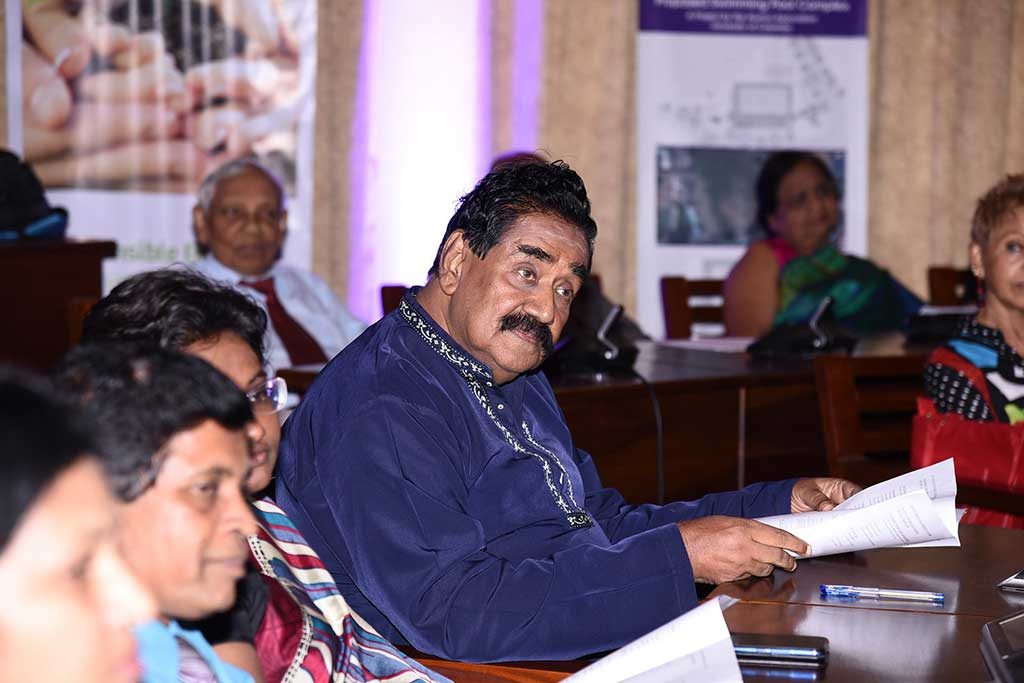 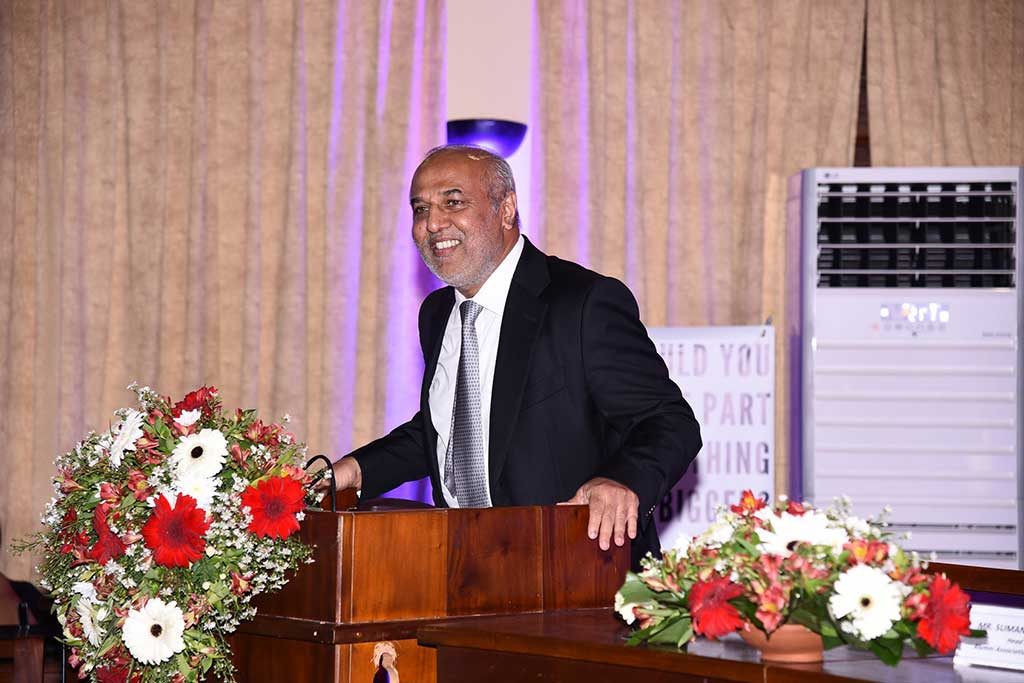 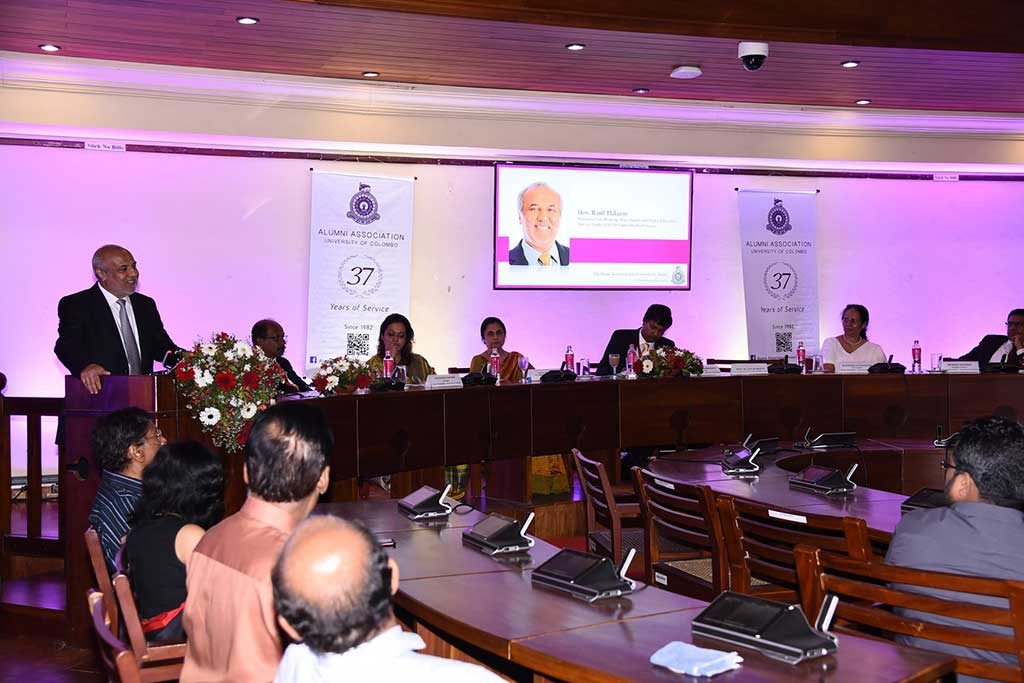 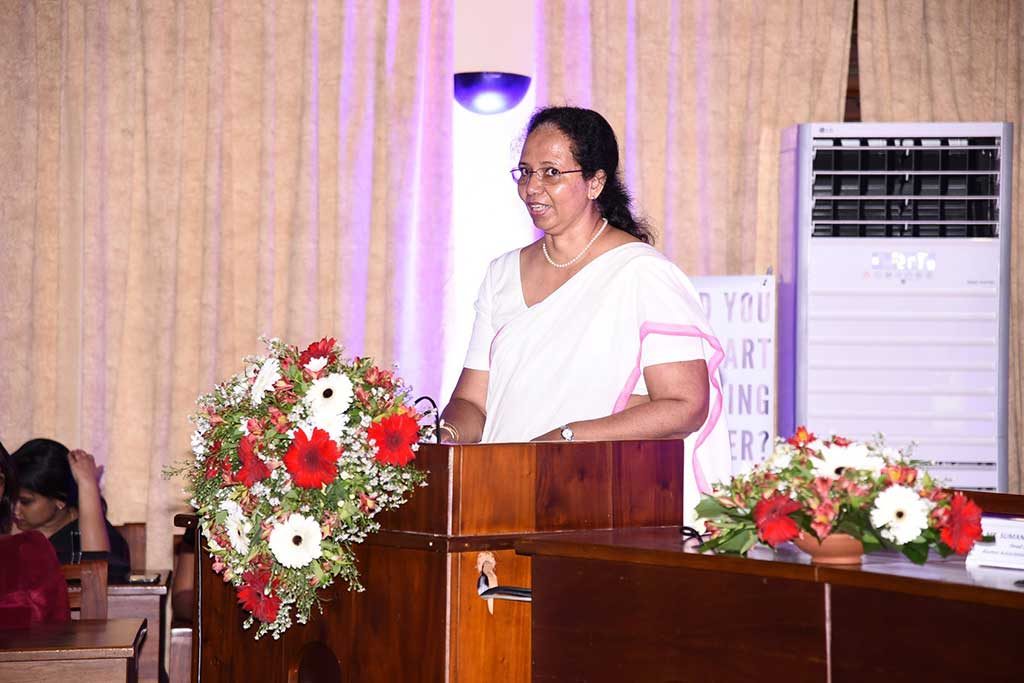 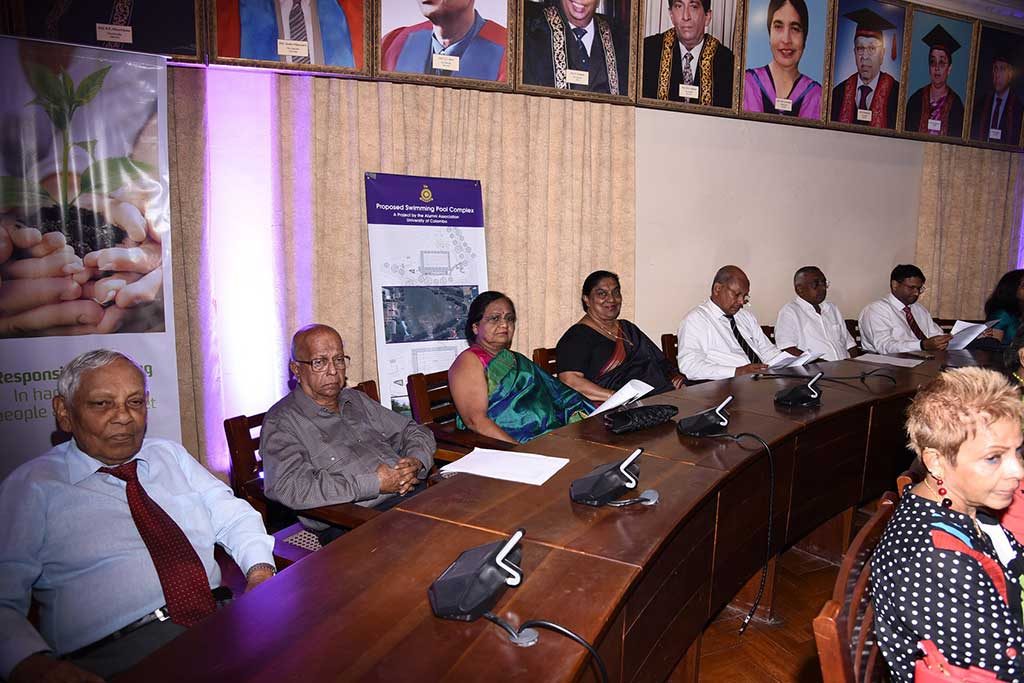 Launch of the Colombo Law Review 2018