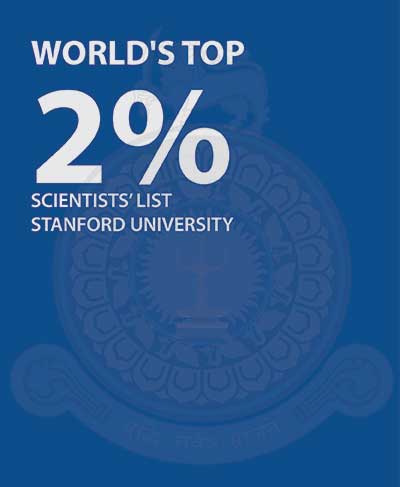 Three academics from the University of Colombo have been ranked among the top 2% of scientists around the world in a recent paper from Stanford University, published in the journal PLoS Biology. This study has classified the scientists based on their career-long citation impact until the end of 2019. A total of 15 scientists from Sri Lanka were listed.

The full paper can be viewed here:

The full datasets can be accessed here, with tables S6 providing relevant data: 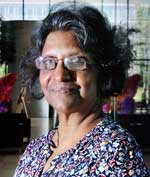 Kamini Mendis Professor Emeritus is a malariologist, an academic, researcher, and an expert in global health of international repute. She graduated from the Colombo Medical School in 1972. She was Professor in Parasitology in Colombo, when she founded and headed the Malaria Research Unit of the Faculty from 1980 – 1997. During those 17 years in research and teaching in Colombo, she made several original scientific contributions to medicine in the field of malaria, which were seminal to the field, and has provided postgraduate training to many young medical graduates and scientists in Sri Lanka. Her research has been published widely in prestigious international journals and recognized through several national and international awards. Nationally, she was awarded among others the Presidential Award Vidya Nidhi in 1983, and internationally, the prestigious Chalmers Medal of the Royal Society of Tropical Medicine, UK in 1991, and the Ashford Bailey Medal of the American Society of Tropical Medicine and Hygiene in 1993. She has been the keynote speaker at a large number of important global events in Tropical Medicine, including delivering the celebrated Gorgas Memorial Lecture in Washington DC in 2000.

She was appointed by the WHO in 1997 to plan launch the global Roll Back Malaria initiative as a flagship programme of WHO, and since then served as the Co-ordinator of the Global Malaria Programme in WHO Geneva until retirement in 2010. After retirement from WHO she returned to Sri Lanka and continued to serve as an independent international expert on malaria. In Sri Lanka, she serves on committees of the Ministry of Health on malaria. Working closely with the Anti Malaria Campaign she played a major advisory role in the programme to eliminate malaria from Sri Lanka, and in obtaining certification from the WHO as a malaria free country. She was also a member of the National Research Council (2014 to 2020) and a committee member of the National Science Foundation. Internationally, she served as a member of the Malaria Policy Advisory Committee of WHO Geneva (2011 – 2018), the highest policy making body of WHO in malaria, and continues to serve as a member of the Technical Expert Groups on malaria of WHO Geneva and the Southeast Asian Regional Office. Prof Kamini Mendis has conducted national reviews of malaria control programmes in several countries in the world. She is also a Director of the Board of the Asia Pacific Leaders Malaria Alliance. Her current interests and pursuits involve supporting regional and international efforts to strengthen the evidence-to-policy pathway for malaria by bridging the research and control gaps in the field and to strengthen policies and strategies to promote research and epidemiology-based malaria control and elimination. She began her research and academic career on malaria when the disease was one of the greatest public health problems both in Sri Lanka and in the tropical world as a whole, and during the course of her career she witnessed the elimination of malaria from Sri Lanka and a major reduction in the global burden of malaria, and she considers it a great privilege to have played a key role in both those achievements. 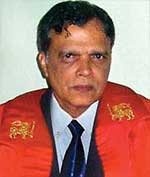 Wanigasekera Daya Ratnasooriya currently serves as an emeritus professor at the Department of Zoology and Environment Sciences, University of Colombo and as a Senior Professor at the General Sir John Kotelawala Defence University. Professor Ratnasooriya graduated from the Faculty of Science, University of Ceylon with B.Sc (Hon) in Zoology. Securing an Open Commonwealth Scholarship, he obtained his Ph.D. in Reproductive Physiology/ Pharmacology from the Department of Physiology and Pharmacology, University of Strathclyde, UK in 1978. Prof. Ratnasooriya joined the Department of Zoology, University of Colombo as a junior academic in 1973 and until his retirement as a Senior Professor in 2014, he has contributed greatly to the department and the entire university system. In recognition of his great efforts to the advancement of the science, he has been awarded the D.Sc. in Life Sciences by the University of Peradeniya in 2008 and a D.Sc. (Honoris causa) from the University of Colombo in 2016. He has published nearly 400 research articles in peer-reviewed journals with over 3400 citations and nearly 300 research communications to date. Prof. Ratnasooriya’s contribution to the field of education is enormous as he contributes fully towards the upliftment of both university and secondary education in Sri Lanka. He serves as an editorial board member of 9 local and international scientific journals and holds fellowships and membership in numerous leading scientific bodies including TWAS (Third World Academy of Science), an achievement as yet held only by five other Sri Lankan scientists. Prof. Ratnasooriya has received a more than 15 prestigious awards in appreciation of his work, including the Hall of Fame Award of the Sri Lanka Association for the Advancement of Science in 2012, and 2 lifetime awards; CVCD (Committee of Vice-Chancellors and Directors, Sri Lanka) Excellence Award for the most outstanding Researcher in Biological Sciences and the General Research Committee Award (GRC) by SLAAS for the outstanding contributions to Scientific Research in Sri Lanka. 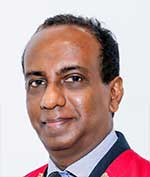 Professor Senaka Rajapakse is an academic clinician and researcher from the University of Colombo, Sri Lanka. He is currently the Director of the Postgraduate Institute of Medicine, University of Colombo. He is Senior Professor in the Department of Clinical Medicine, University of Colombo, and Honorary Consultant Physician, National Hospital Colombo. Professor Senaka Rajapakse graduated from the Colombo Medical Faculty in 1993 with First Class Honours and distinctions in physiology, biochemistry, microbiology, pathology, parasitology, pharmacology, forensic medicine, paediatrics, and medicine, winning 16 medals and awards including the Sir Andrew Caldecott Medal for the final MBBS. He joined the Department of Clinical Medicine in 1996, completed his MD in the University of Colombo in 1999 and the MRCP(UK) in 2003, was Board Certified as a specialist in general medicine in 2001, and is registered as a specialist in general internal medicine in the UK. He was promoted to Professor in 2009, and Senior Professor in 2018. He is a Fellow of the Royal College of Physicians of London and Edinburgh, the American College of Physicians, the Ceylon College of Physicians, and the National Academy of Sciences of Sri Lanka. He is President Elect of the Ceylon College of Physicians for 2021, past President of the Sri Lanka Society of Internal Medicine, and Regional Adviser for Colombo to the Royal College of Physicians of Edinburgh. He is co-editor of the Ceylon Medical Journal, and is on the editorial board of several journals. He has supervised and trained numerous specialist medical trainees and research students. He is also the Director of the Network Operations Centre of the University of Colombo and has played a leading role in development of online teaching and learning.

His main research interest is in tropical infectious diseases, in particular dengue and leptospirosis, and he has over 140 publications in peer-reviewed journals, with over 3500 citations and an H-index of 34. He has won numerous research awards, including many Presidential Awards for research, the National Science Foundation Research Award for Scientific Excellence in 2017, the University of Colombo award for Excellence in Research 2002, 2011, & 2015, and the Vice Chancellor’s Award for Excellence in research 2017. He was the SCOPUS Most Prolific Author for 2011-2017. He was awarded the CVCD (Committee of Vice-Chancellors and Directors, Sri Lanka) Most Outstanding Senior Researcher in Health Sciences Award in 2016, which is a lifetime award for excellence in research.