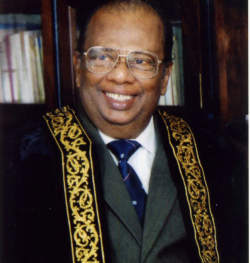 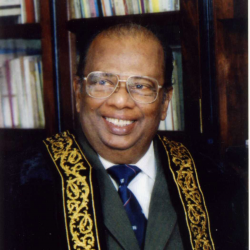 The Late Professor Nandadasa Kodagoda was born on 31st October 1929 in Hikkaduwa and grew up in the village of Ahangama in the Southern Province of Sri Lanka. He received his early education at the Ahangama Temple School. After the first two years of education, he was admitted to Nalanda Vidyalaya, Colombo. Nandadasa’s parents took him back to the Galle district, and admitted him to Mahinda Vidyalaya in Galle during the World War ii period.

Nandadasa completed his secondary education at Mahinda Vidyalaya and having passed the University Entrance Examination, entered the Faculty of Medicine of the University of Colombo. After obtaining the degree of Bachelor of Medicine and Bachelor of Surgery in 1956, he joined the Health Department and was attached to the government hospitals in Galle, Colombo & Karawanella. In 1959, he joined the Faculty of Medicine as a Lecturer in Forensic Medicine.

Prof. Kodagoda was the Chairman of the National Dangerous Drugs Control Board and the Founder Chairman of the Alcohol & Drugs Information (ADIC) Center. Prof. Kodagoda took a keen interest in health education and popularising science by handling the media dexterously and innovatively and wrote widely and extensively. It was in recognition of his work and service to Mother Lanka, that the title of “Deshamanya” was bestowed on him by Her Excellency the President in 1994. He was also conferred the title of “Visva Prasadini” by the Hon. Prime Minister in 1996. Prof. Kodagoda was also awarded the prestigious title “Kala Keerthi”, a fitting honour in acknowledgement of his versatility and outstanding contribution in the spheres of Arts and Culture.