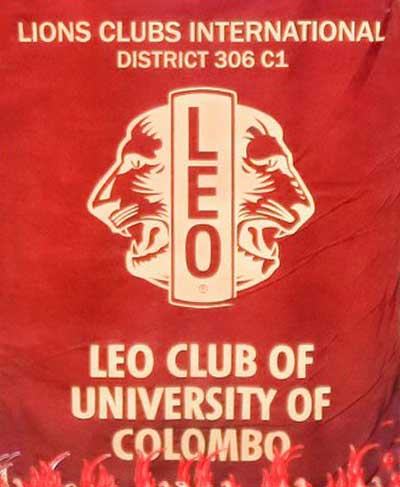 ‘Forerunner’ the Annual District Conference for the Leo District 306 C1 was held on 26th July 2020 at Renaissance hotel Malabe as glamorously as ever. As the chief guest, the District Governor Lion Mahinda Perera MJF MAF JP graced the event. The guest of honour for the evening was the District Governor elect Lion Chethiya Paranathanthri MFJ MAF JP and the special guest was the Multiple District President Lion Dilruk Tissera along with international Leo club advisory panellist Lion Hasitha Warnakulasoriya. The Leo Club of University of Colombo is extremely grateful and honoured to share that the club proved again to be one of the best Leo clubs in Srilanka by stealing the limelight of the event after winning numerous awards under different categories. The club was able to secure back the title as the Most outstanding club for the year for the 3rd consecutive year and validate the fact that the Leo club of University of Colombo is the actual ‘Forerunners’ of the history of Leoism. Also, the President of the year 2019/20 Leo Sandun Perera being recognized as the Most Popular Leo should be highlighted as well. As the most awaited Club awards of the year, the club was able to achieve the following categories;

The extraordinary journey of the year 2019/20 was given a well-deserved appreciation at the event by being awarded as the winner of 9 service projects under the categories of;

The 4 service projects won the 1st runner up place were;

Followed by 2nd runners up for 3 more service projects;

As the Best Inter-District Joint Project; the project Elation won the 1st Runner up and as the Best Intra District Joint Project C-One-Querorz was awarded as the Winning project. Two Special Service Individual Awards under the service project category was won by Leo Dinu Meegama for the project Sandhwani as the Most Outstanding Innovative Project Winner and Most Outstanding Continuous Project 2nd Runner up. The individual awards won by the Executive Committee for the year 2019/20 and the 1st Runner up awards were won by following individuals at different categories;

2nd Runner up as the;

The Leo Club of University of University is grateful for being recognised by the Leo District 306 C1 for all the sacrifices and hours of hard work of the club members in order to make a significant contribution to the community. These exceptional achievements claimed for the year 2019/20 will be the motivating factor inspiring future generation of the club and many individuals to reach the impossible heights of success. Our sincere gratitude is extended to the Vice Chancellor Senior Professor, Madam Chandrika N. Wijerathne for being an inspiration and for being humble enough to share your invaluable time for the further refinement of the club. The club Advisor Dr. Rajitha Silva and the other respective personalities who always volunteered to guide us through the journey of success, thank you for all your untiring effort throughout the year.

We are extremely grateful for the enthusiasm and the dedication of the past Executive committee members and the past club members who made this journey easier and The Executive Committee for the year 2019/20 who were the driving force behind the success of the club. The untiring efforts along with hours of hard work by the club members of the Leo club of University of Colombo are the strength and the power of the club and the real owners of these great achievements.

No. 1 among Sri Lankan Universities in the Webometrics Ranking 2020